Cull the other one: Call for hunt of vicious seagulls 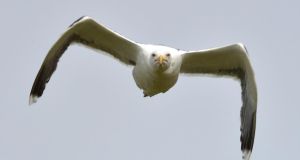 A call has been made for a cull of seagulls who are “endangering society” and “invading towns”.

He echoed the sentiments of his party colleague Ned O’Sullivan who this time last year said seagulls “have lost the run of themselves completely”.

Mr O’Sullivan got some abuse for his comments about the gulls being raucous and keeping people awake and for describing them as vermin and scavengers.

But in the Seanad on Monday Mr O’Donovan pointed out that “no less a person than prime minister of Great Britain, our neighbours - David Cameron - has come out publicly to record his concern and his worry about the way seagulls are behaving”.

Last week Mr Cameron called for a “big conversation” about seagulls after attacks by gulls in Cornwall, England last week.

Mr O’Donovan said Mr Cameron made his remarks “because a tortoise and a child’s pet, a terrier dog, had been killed in the recent past by seagulls”.

Mr O’Donovan, Leas-Cathaoirleach of the Seanad said “it’s coming to the stage where they’re actually endangering society. Their behaviour is coming to the stage, to be realistic now, it’s like a rabbit with myxomatosis or a cow with mad cow disease.”

Mr O’Donovan said they should consider a cull of “this vicious seabird. Seagulls usually live at sea and nest on cliffs, but they are now invading towns and villages.”

He said the normal food supply for seagulls was fish. “That product is getting scarce whether we like it or not. It’s probably one third of what it was 30 or 40 years ago.”

He added: “Seagulls have actually killed lambs, they’ve killed rabbits,” and he described them as a nuisance and a pest.

Labour Senator Denis Landy quipped that “there’s a seagull looking in the window at you” and warned Mr O’Donovan that he’d want to be careful.

But the Cork Senator said it was a very serious issue and calling for a debate, he said: “You see a child eating fish and chips and a seagull attacks the food that that child is eating”.

Seanad leader Maurice Cummins (FG) said he did not believe the issue of seagulls was a “flight of fantasy”. He added: “It is an important issue if seagulls are stealing the food from children and damaging animals. I heard on the radio earlier that a lady in the Botanic Gardens had her telephone taken by a seagull.”