District Court judges’ retirement age to increase from 65 to 70 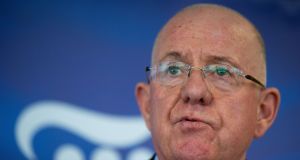 Minister for Justice and Equality Charlie Flanagan: said he increased the number of judges to ‘ensure the efficient administration of justice’. Photograph: Tom Honan

The process of appointing six additional judges to the Court of Appeal is expected to begin in September.

Legislation to increase the statutory number of judges from nine to 15 was passed by the Dáil on Thursday.

Minister for Justice Charlie Flanagan said he hoped to bring the matter to Cabinet at its first meeting in September after the summer recess.

The new appointments are expected to cut the waiting time for appeals to the Court, currently at between 18 months and two years.

The Courts (Establishment and Constitution) (Amendment) Bill also provides for the increase in the retirement age of District Court judges from 65 to 70 bringing them into line with other members of the judiciary.

with “the caseload it inherited from the Supreme Court and the volume of new cases it is taking on in its own right.

“This Bill will address the waiting times for cases and improve efficiency in the appeals process for the wider benefit of our justice system.”

The court was established in 2014 after a referendum because of waiting times of up to four years for cases to be heard by the Supreme Court.

But while Supreme Court hearing times had been cut, the average waiting time for cases in the Court of Appeal is approximately 22 months.

The Minister said he increased the number of judges to “ensure the efficient administration of justice”.

Separately, the Seanad passed the Parole Bill, which reforms the Parole Board by placing it on an independent, statutory footing to review the cases of prisoners in an “open, transparent, fair and fully informed” way.

The current board operates on an administrative basis and its role is to review the cases of prisoners sentenced to determinate sentences of eight years or more. Under current arrangements, the Minister for Justice can accept the recommendations in their entirety, in part or reject them.

The legislation was first introduced as a private member’s Bill in the Dáil by Fianna Fáil justice spokesman Jim O’Callaghan who said it would be of “ particular assistance to the victims of crime who now will know when persons who perpetrated crimes will be eligible for and be able to apply for parole”.

Victims of crime will now also be able to make submissions about parole applications.