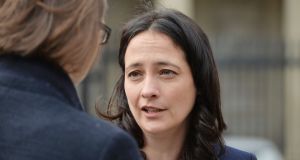 Green Party TD Catherine Martin: “I met the Egyptian ambassador but I regret to say I took nothing from that meeting that could give confidence or hope”

Calls have been made for the Government to consider the suspension of diplomatic relations with Egypt and trade restrictions, because of the ongoing detention of Irish citizen Ibrahim Halawa, imprisoned in Cairo for more than three years.

The calls came as the Dáil agreed an all-party motion seeking his release following his arrest aged 17 by the Egyptian army in a mosque in Cairo in August 2013 where he had taken refuge after anti-government protests. The motion calls for Egyptian ambassador Soha Gendi to appear before the Oireachtas foreign affairs committee to address repeated delays in his trial. An all-party delegation will be established to visit the Egyptian parliament and to visit Mr Halawa in prison. His trial was adjourned for the 13th time last week.

The motion welcomes the move by the Government and Minister for Foreign Affairs Charlie Flanagan to give its full support to a second application under Egypt’s presidential decree, law 140, to Egypt’s president Abdel Fattah el-Sisi to seek Mr Halawa’s release.

Members of Mr Halawa’s family were in the Dáil’s public gallery for the hour-long debate on the motion.

Green Party deputy leader Catherine Martin said if all diplomatic interventions failed “it may become necessary that some consideration be made to suspending diplomatic relations” over the case. “I met the Egyptian ambassador but I regret to say I took nothing from that meeting that could give confidence or hope,” she said.

The Minister told the Dáil Taoiseach Enda Kenny spoke on Monday to the Egyptian president for the third time about Mr Halawa’s case.

Mr Flanagan said the case had received unprecedented attention from the Government, the Department of Foreign Affairs and the Embassy in Cairo and he last month raised the issue when he met Egyptian foreign minister Sameh Shoukry.

The Minister said they had been using all the tools available to apply maximum pressure on the Egyptian government.

People Before Profit TD Richard Boyd Barrett said however it was time to stop treating the Egyptian regime with kid gloves when it was “engaged in ruthless suppression of its own population”. He said “we have to talk about sanctions”, to demand them at EU level and impose them in Ireland.

Independents4Change TD Clare Daly said the State was giving “false signals” which it had to rectify and “use trade as leverage”. The Government signed a live export trade deal with Egypt in February this year when Mr Halawa had been held captive for 922 days in “atrocious, violent conditions”.

Sinn Féin leader Gerry Adams said the Government’s strategy to date, “though very well-intended, in attempting to secure his release has clearly been unsuccessful”.

Fianna Fáil Dublin South West TD John Lahart said some of the remarks in the debate had been intemperate: “I regard consular officials as some of the great patriots of this country who are the last line of defence for our citizens”.