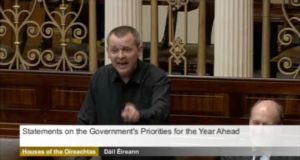 People Before Profit TD Richard Boyd Barrett lets fly in the Dáil yesterday before being asked to temper his language.

People Before Profit TD Richard Boyd Barrett was reprimanded yesterday after he blasted the Taoiseach and Tánaiste in the Dáil over their progress report on the state of the nation delivered outside Government Buildings earlier in the day.

Deputising for the Ceann Comhairle, Labour’s John Lyons TD upbraided Mr Boyd Barrett for his unparliamentary language and reminded him there were children present in the public gallery.

The People Before Profit TD said Enda Kenny and Eamon Gilmore had tried to present the economy as a recovering success story in the wake of the troika bailout exit, but then claimed: “The Government are living so far out of reality they might as well be in the outer stratosphere of a planet on the other side of the universe!”

He said: “The unemployed are being dragooned, under threat of having social welfare taken off them, into low paid jobs in local authorities which should be properly paid jobs.”