Ahern and Cowen receive most in State pensions 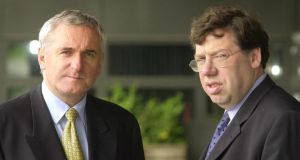 Former Fianna Fáil taoisigh Bertie Ahern and Brian Cowen are receiving the highest State pensions for politicians, according to figures revealed in the Dáil.

In certain cases, the pension amounts did not reflect the actual amount paid where an individual was “gifting’’ all or part of his or her pension to the State.

Ms McDonald said a small number of people were “overpaid and over-pensioned’’, while others employed by the State were on “poverty wages’’.

Mr Howlin said people had legal entitlements to pensions and reductions had been introduced as far as could be done on the Attorney General’s advice.

“I do not believe we should exclusively look at people who are in politics and exclude senior administrators, judges, senior gardaí and senior academics,’’ he added.

Mr Howlin said he was not in a position to reveal what instructions he had given to the public service pay negotiators.

“I do not know any negotiator who would set out his or her negotiating hand in advance,’’ he added.

He said it was important that pensions comprised an important part of the package available to get people to work in the public service.

“We will have to start discussing how we can ensure we get quality people to work in the public service,” Mr Howlin said, “because there will be pressures associated with the filling of senior positions when recovery comes, and there will be much more lucrative opportunities in the private sector”.

Ms McDonald said she hoped this would apply to all levels in the public service.