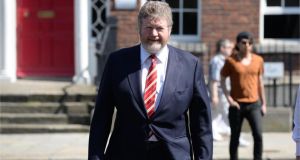 Minister for Health James Reilly told the Seanad this afternoon that the Protection of Life During Pregnancy Bill was about protecting the life of the mother and her unborn child.

Opening the debate on the Bill today, Dr Reilly said its only purpose was to clarify what was lawfully available by way of treatment in cases where there was a real and substantial threat to the life of a pregnant woman and to set out clearly defined and specific circumstances in which that procedure could be lawfully provided.

Labhras Ó Murchú (FF) said they had to keep reminding themselves, even though certain comments had been made about the church and religion and people being sanctimonious, that they were talking about the right to life.

“We have learned that it is acknowledged widely that Ireland has the safest medical environment for an expectant mother and that treatment is not withheld when the life of the mother is in danger,’’ he added.

Fiach MacConghail (Ind) said the Bill was doing exactly and no more than what the expert group had recommended. “Pregnant women must be trusted,’’ he added. “As a man, father, partner, citizen and Senator, I believe in women’s right to bodily integrity.’’

Ivana Bacik (Lab) said that 24 years ago she was threatened with prison, as a student union officer in Trinity College, for providing women with a crisis pregnancy with information on where they could have an abortion.

“However, I accept we must operate within the parameters of the Constitution.’’

Maurice Cummins (FG) said he would not want to vote for legislation introducing abortion on demand or liberalising it.

The Bill, he added, would introduce legal clarity and terminations would only be carried out where the risk to the woman’s life was fully assessed and certified by specialists as the only option available to avert that risk.