Minister says ’a lot of things not right’ in animal welfare 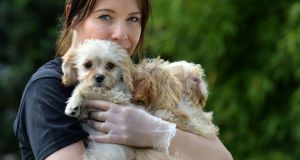 There have been repeated calls for a crackdown on ‘puppy farms’ and unscrupulous dog breeding establishments, the Dáil heard on Wednesday. Photographed is Natasha Eames from DSPCA with some Cavachon puppies rescued from a car at Dublin Port in 2016. File photograph: Dara Mac Dónaill

Legislation to ban the sale of pups online is being considered by the Government following the introduction of new animal welfare guidelines.

Minister of State for Rural and Community Affairs Sean Canney said a “lot of things are not right” in animal welfare.

Mr Canney said a “plethora” of important submissions had been received during the consultation process on animal welfare guidelines which came into effect in January 2019.

The submissions could not have been included in the guidelines but “the comments necessitate that my department look at the legislation”.

There have been repeated calls for a crackdown on “puppy farms” and unscrupulous dog breeding establishments.

Mr Canney said “a lot of things are not right, including the sale of pups online. We have to look at all of this in the context of legislation,” and he hoped to bring in a Bill before the end of the year to amend the Dog Breeding Establishment Act.

Independent TD Tommy Broughan said during questions in the Dáil on rural and community affairs that there were “incredible horror stories” of animal cruelty, some of which got to the courts.

He highlighted figures from the charity Dogs Trust which “received requests from nearly 400 people to surrender their dogs after Christmas” and asked if there were any measures that could be taken to deal with people buying dogs for children and surrendering them after just a couple of weeks.

The Dublin Bay North TD pointed out that three departments had responsibility for animal welfare – the Departments of Agriculture, Rural and Community Development, and Communications. He called for a “more vigorous regime” and better regulation and oversight of dog breeding establishments.

The Minister said that many of the submissions suggested that a breeder has to register as a dog breeding establishment if they have three breeding bitches rather than the current six.