NI Orangemen to march in Edinburgh ahead of referendum

Pro-Union figures from North say No to Scottish independence 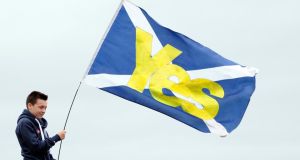 Latest polls suggest 51 per cent of voters are in favour of Scotland breaking from the United Kingdom. Photograph: Graham Stuart/EPA

Orange Order members from Northern Ireland are set to march in Scotland to demonstrate their support for a No vote in the upcoming independence referendum.

A Belfast-based spokesman for the Grand Orange Lodge of Ireland confirmed that Irish Grand Master Edward Stevenson would travel to Edinburgh with other senior Orangemen.

“The parade is being organised by the Grand Orange Lodge of Scotland. They have asked various Grand Lodges from across the UK to attend and yes, there will be representation from Northern Ireland,” the spokesman said.

The move comes as British opinion polls suggest that Scottish voters may opt for independence and vote Yes in large numbers.

The Orange Order spokesman said Mr Stevenson would speak at a rally before the march which is scheduled for five days before the referendum vote on September 18th.

The spokesman said that while nothing had been organised centrally, a large number of local lodges were also expected to travel to take part in the event.

“It’s safe to say there will be quite a large number,” he added.

The percentage of voters in favour of Scotland breaking from the United Kingdom rose to 51 per cent less than two weeks before the referendum, according to a YouGov Plc poll for the Sunday Times.

It followed months of surveys that showed Scotland was unlikely to vote to leave the UK.

This summer’s marching season in Northern Ireland passed off peacefully.

PSNI chief constable George Hamilton praised the Orange Order and unionist and nationalist politicians for helping ensure that Twelfth of July celebrations, particularly in north Belfast, passed off without any major incidents.

The chief constable had mounted a big security operation to cope with any outbreak of violence but in the end, the day concluded peacefully.