Opinion: It was plain that the Guildford Four, like the Birmingham Six and Judith Theresa Ward had been framed 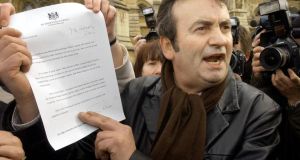 Gerry Conlon shows the letter of apology he received from then prime minister Tony Blair, in 2005. Photograph: Stefan Rousseau/PA

Vincent Browne emerges with credit from the Gerry Conlon story. So do Tom McGurk, the late Mary Holland, David McKittrick and John Mulcahy. There may be other Irish journalists who should be mentioned, but names don’t spring to mind.

In the years following the 1975 conviction of the Guildford Four, Browne and these others persistently drew attention to the inadequacy, to put it mildly, of the evidence against them. But the generality of the Irish media, including some journals and journalists who in the past week have been lamenting the injustice visited upon Gerry Conlon, Paul Hill, Carole Richardson and Patrick Armstrong, chose to sit this one out.

It cannot be pleaded that it is easy now to identify the gaps, flaws and dishonesties in the prosecution case, but that this wasn’t obvious then. In fact, it was obvious back then that, at the very least, the convictions were unsafe.

Ed Moloney, formerly Northern editor of The Irish Times, wrote on Tuesday: “If the story had been left to the Irish media to cover, Gerry Conlon would have died in a prison cell.” There is an element of speculation in this, but it is grounded in fact.

Moloney continued: “It was clear that there was evidence of a serious and scandalous miscarriage of justice that cried out to be probed by the media. But in those days to write that people like Gerry Conlon might be innocent . . . was tantamount to an admission of IRA membership and was fatal for the career of an ambitious Irish reporter. So mainstream Irish journalists ... learned to keep away from such stories.”

The notion that the convictions should be considered in light of revulsion against the IRA bombing campaign, deep- rooted anti-Irish prejudice and pressure on the police to find the culprits doesn’t stand scrutiny. It was plain at the end of the trial or shortly after that the four, like the Birmingham Six and Judith Theresa Ward (who spent 18 years in jail for the bombing of Euston station in 1973) had been framed. Threats and brutality had been used to extract confessions, perjured evidence offered, evidence casting doubt on the defendants’ guilt suppressed.

This is the key to the scandal that no invocation of the atmosphere of the time should be allowed to obscure.

The prosecution, led by attorney general Sir Michael Havers, poured scorn on the defendants’ claims that they had been terrified into making the confessions on which his case rested. British police didn’t behave like that. Summing up, he suggested details in the confessions that matched other evidence were obviously true, while the many details contradicted by other evidence had been intended to throw the police off the track.

Havers personally distributed gruesome pictures of the mangled bodies of the bomb victims to reporters.

Johnson corroborated her story in detail. The timings they recalled would have made it impossible for Richardson to have been in the Guildford pub when the bomb was planted.

Both were arrested and threatened. Johnson changed his story, then repudiated the changes. Astin, under ferocious questioning, stood firm by her account throughout. She emerges as a heroine for truth. Her and Johnson’s evidence was brusquely, scornfully discounted by trial judge Mr Justice Donaldson.

These are but a few of the anomalies and contradictions that glare out from the public record. A savage resolve to punish the four came through in the sentencing. Had capital punishment been available, the judge told the four, he would have had them all executed. Richardson received 20 years minimum, Conlon not less than 30 years, Armstrong at least 35 years. He cautioned Armstrong not to hope that “you will necessarily ever be released”.

After the release of the four in 1989, Paul Reynolds, BBC world affairs correspondent, who had sat through the case, wrote ruefully: “The reporters who covered the trial have often wondered if they could have done more to point out the weaknesses of the case ... We did try once . . .Three of us went to see Lisa Astin to get more details but ... we were warned off [by the defence].

“Yet, had we been encouraged along this path, the real truth might have come out earlier.” At least they tried. Not everyone can say that.