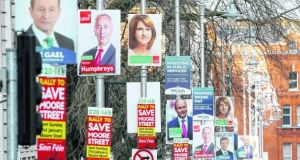 Fine Gael and Labour have mixed fortunes in the three latest opinion polls with one Sunday newspaper predicting an increased likelihood of a hung Dáil, while another shows increased support for the largest party. Photograph: Niall Carson/PA Wire

Fine Gael and Labour have mixed fortunes in the three latest opinion polls with one Sunday newspaper predicting an increased likelihood of a hung Dáil, while another shows increased support for the largest party.

The Sunday Independent /Millward Brown poll shows support for Fine Gael and Fianna Fáil has slipped marginally, but has risen for smaller parties and independents. Labour remains in single figures while Sinn Féin support is unchanged.

The Sunday Times Behaviour & Attitudes opinion poll says the likelihood of a hung Dáil increased following a fall in support for Fine Gael from 31 per cent to 28 per cent. Labour can take some slight comfort with a two points increase in support to 8 per cent, but it remains in single figures.

Sinn Féin support has risen by one per cent to 17 per cent while the Independent Alliance is up one point to 4 per cent and the People Before Profit Anti-Austerity Alliance and the Greens remain unchanged at 3 per cent but satisfaction with the Green party leader Eamon Ryan has risen five points to 37 per cent.

Satisfaction with the Government was up one point to 34 per cent but the paper notes that dissatisfaction has increased by 7 per cent to 65 per cent and the drop in party support for Fine Gael is most pronounced among women, down from 33 per cent to 27 per cent, according to the Behaviour & Attitudes poll.

Support for the Social Democrats has risen 3 per cent to 4 per cent, registering above the margin of error (3 per cent) for the first time.

The Sunday Business Post Red C poll offers most comfort to Fine Gael with support up two points to 31 per cent while, Labour remains unchanged at 10 per cent.

The Irish Times/Ipsos MRBI poll earlier this week showed Fine Gael down 2 per cent to 28 points, while Labour remained unchanged at 7 per cent offering a combined 35 points support. Fianna Fáil were up two to 21 and Sinn Féin were down two to 19 per cent, while Independents/Others were at 25 per cent, up two points.

The Sunday Independent poll also showed preference for a Government combining Sinn Féin and Independents at 14 per cent was as popular as one with Fine Gael and Labour (14 per cent).

The Millward Brown analysis points to some good news for the Government in that for the first time since 2008 people are more positive about the financial situation over the next 12 months with 23 per cent believing they will be better off next year (up from 16 per cent), while 43 per cent feel they will be the same (down from 48 per cent).

Just over one in four people (27 per cent) believe either Fine Gael or Labour can be most trusted to manage the economy, compared to 17 per cent for Fianna Fáil and 13 per cent for Sinn Féin in the Sunday Independent/Millward Brown poll.