To his credit, Gilmore realised it was time to go before they forced him 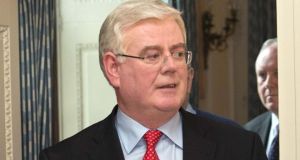 The Gilmore generation: he brought them in and they brought him down. But it was a well-mannered mutiny: a civilised coup.

They owed him that much. Eamon Gilmore could have hung on as Labour leader for a good while longer. He could have followed the party rulebook and delayed the inevitable. But his time was up. The Tánaiste – he remains in office until a successor is chosen – said he reached his decision over the last few days. “Agonising” over what to do in the wake of overwhelming rejection at the polls, while robustly declaring in public he was staying put.

“You go through a weekend and you think, you know, should I fend off all comers or should I, you know, pass on the baton. . .”

By yesterday morning that wasn’t a difficult choice. He could either pass on the baton or get beaten over the head with it. So Gilmore did something he should have done a lot more times during his tenure as party leader: he moved quickly and he made a decision.

He announced his resignation in the rarefied confines of Iveagh House, headquarters of the Department of Foreign Affairs. A fitting location for a man who promised so much upon getting into government, before disappearing down the back of an antique sofa in the ministerial mansion. The scene in the downstairs reception room spoke volumes yesterday. Gilmore, dignified and measured, taking full responsibility for his party’s collapse and facing up to that responsibility by standing down after seven years in charge. Senior colleagues clustering protectively around him – all the “heavyweights” with their years of Cabinet and Dáil experience. They were never going to be the ones to call a halt.

Set in their ways. Some set for retirement. Two of them past leaders, with Gilmore soon to join them.

A trio of youthful Ministers of State only served to point up the age profile of the ubiquitous others. There they stood, looking crushed and forlorn, amid the plush drapery of the Minister’s anteroom with its ornate mahogany fireplace, floor- to-ceiling windows, crystal chandelier and oriental urns.

Earlier in the day, much earlier, a different group of Labour politicians assembled in Deputy Ciara Conway’s flat in the Coombe. None had ever held high office. None has been around long enough to accumulate a nice pension. First-timers all, brought into politics by Gilmore, stirred by all he stood for when the party was in full opposition cry. They backed him to the hilt when older heads lost faith and abandoned the parliamentary fold. They were his strongest supporters. Even when they felt he should be more assertive in Government they gave loyal support.

It must have rankled hugely when critics sneered at their lack of backbone. Newbies afraid of their own shadows. Reports came back of stormy parliamentary party meetings. The first-timers brought their complaints to the old hands. The heartland was hurting, people were losing patience. As committed Labour representatives they were reduced to defending the indefensible. They pleaded with Gilmore to leave Iveagh House. They wanted more than just occasional visiting rights to their erstwhile mentor, that’s when he was in the country. Last weekend the Gilmore Generation finally had enough. At that meeting in the Coombe, after much soul searching, they realised they had to cut the ties to their Tánaiste.

Those patrician elder statesmen and women weren’t up to the task. To his credit, Gilmore realised it was time to go before they forced him. But that won’t be enough for the new intake. Yesterday, over the airwaves, they made it clear they want new blood at the top, not a reshuffle of the same old names.

Things moved quickly. But not, perhaps, as quickly as the Tánaiste and his people would have us believe. There was talk of some last- minute attempts to persuade the group to back down. They refused. Gilmore said he had no knowledge of their deliberations. Which is strange, when the Taoiseach, beyond in Castlebar, told reporters he had heard the rumblings and had tried to contact his Tánaiste by telephone. Gilmore didn’t answer his calls. Which isn’t surprising, in a chaotic Government where ignoring telephone calls seems to be the order of the day. The Attorney General wouldn’t talk to the Taoiseach on the phone either, while Enda didn’t care to call Eamon when the Shatter crisis was at its height. In the end, the new generation cast Labour’s Cabinet heavyweights aside and asserted its authority.

Gilmore, a decent man, left with dignity and spared his party the ordeal of a public unseating. In their quest to pull the country from the brink of disaster, he said the Coalition had to make tough decisions.

“A course that carried a high political risk and Labour has paid the price for that.”

He sounded sad, struggling to smile through his personal upset, trying to remain upbeat. “I asked the party to take on the responsibility of government. I still believe that that was the right decision,” he said. And in a sideswipe at the Sinn Féin – now celebrating as Labour mourns – he declared “real politics is about finding real solutions”. But the public’s resounding verdict could not be ignored. “We’ve got the message. We’ve heard it,” he said. It’s time for Labour to “recover, regroup and renew”.

Who will take over? There will be elections now for a new leader and deputy leader. Outgoing second-in-command Joan Burton will have to put up or shut up now after long months of shadow-boxing around Gilmore’s job. Joan has to lay her cards on the table now.

But it may be too late for her. The Gilmore Generation wants a regime change. Of the old guard, it seems Brendan Howlin is the only one they have any time for.

“The renewal of the party needs a new voice at the microphone,” said the departing Gilmore.

Meanwhile, Enda Kenny waits. He’s not the only one doing that in Fine Gael. They have a new generation too. And they ain’t happy either.

Gerry Adams and Mary Lou, on the other hand, are laughing.