Donohoe, Fitzgerald and Varadkar insisted that Enda Kenny had to deal with the issue 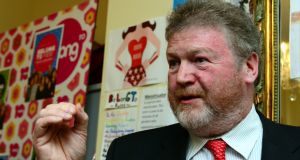 Minister for Children Dr James Reilly: The Taoiseach gave him a dressing-down in front of his party’s ministerial team over his comments calling for a repeal of the Eighth Amentment. Photograph: Cyril Byrne/The Irish Times

Taoiseach Enda Kenny has been urged by three of his senior Ministers to address concerns surrounding the Eighth Amendment of the Constitution.

Minister for Transport Paschal Donohoe, Minister for Justice Frances Fitzgerald and Minister for Health Leo Varadkar insisted at the weekly Fine Gael meeting of Ministers that Mr Kenny had to deal with the issue.

Mr Kenny had come under pressure after Minister for Children James Reilly urged a repeal of the amendment, which gives an equal right to life of the mother and the unborn, in an interview at the weekend.

The Taoiseach earlier this week gave Dr Reilly a dressing-down in front of his party’s ministerial team over his comments.

However, Mr Donohoe and Ms Fitzgerald, who are two of Mr Kenny’s closest allies, intervened and urged the Taoiseach to address the issue.

Mr Varadkar also spoke and insisted that Fine Gael must make its position known sooner rather than later.

“The Taoiseach is extremely angry at James Reilly. In his eyes, it is not the way his deputy leader should act,” a senior Government source said.

“When Paschal and Frances spoke at the meeting, he knew he had to address the issue.

Mr Kenny addressed his parliamentary party meeting on Wednesday night and confirmed that a free vote on the issue would be facilitated by the party.

The Taoiseach said a constitutional convention would look at the proposal and, if it requested a repeal of the Eighth Amendment, an Oireachtas committee would examine the legislation to replace it.

He said TDs and Senators would be allowed to vote with their conscience on the legislation.

The decision caused some shock within Fine Gael but the move has been welcomed across the party.

Minister of State for Finance Simon Harris said the Taoiseach had taken a very sensible approach to a difficult and sensitive issue.

John Deasy said he was one of many Fine Gael TDs who had requested a free vote on the Protection of Life During Pregnancy Bill, which allowed for terminations when a mother’s life is at risk.

Mr Deasy said Mr Kenny’s U-turn was an acknowledgement he had made a mistake on that piece of legislation.

Renua Senator Paul Bradford welcomed his former party leader’s announcement. He was among two senators and five TDs expelled from the party over the Protection of Life legislation. Brian Walsh TD has since rejoined.

“It is unfortunate, however, that like Sunningdale for slow learners, the Taoiseach took so long to learn that a new young country requires a different style of political leadership,” Mr Bradford said.

Labour and Sinn Féin will call for a repeal of the Eighth Amendment in the upcoming election.

Fianna Fáil will allow a free vote but will not call for a referendum in its manifesto.