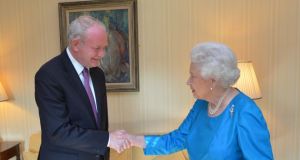 The former IRA leader spoke with the British monarch for some 15 minutes after she arrived at Hillsborough Castle for the start of her 21st visit to Northern Ireland.

She was accompanied by the Duke of Edinburgh Prince Philip. And while the IRA was responsible for the 1979 murder of Prince Philip’s uncle Lord Mountbatten the Sinn Fein leader said that the killing did not arise over the course of their conversation.

“It was a very nice and useful meeting,” he said outside Hillsborough Castle of the third meeting between them. “I was an Irish republican when I went in there and I am still a very proud Irish republican,” he added.

Mr McGuinness said, while he met the queen in Belfast in 2012 and in April in Windsor Castle, that today’s private meeting was “much more substantive”. He said it was “positive” and that they had “real dialogue” about achieving reconciliation.

“She is someone who absolutely and passionately supports the peace process, and supports big acts of reconciliation,” he said.

“The vast bulk of our people appreciate the contribution that Queen Elizabeth is making to peace and to the reconciliation process,” added Mr McGuinness.

The Sinn Fein leader also referred to how tomorrow morning the queen is visiting the old Crumlin Road jail in north Belfast, where during the early part of the Troubles hundreds of republican and loyalist paramilitaries were imprisoned. Mr McGuinness himself spent some six weeks there on remand in 1976 where he faced IRA membership charges.

Noting that this is the first time that Buckingham Palace and the Northern Ireland Office released advance details of her itinerary, Mr Robinson said: “It is a sign of changed times that the logistics of this visit could be announced before her majesty the queen’s arrival. There was a time when a royal visit could not be reported in advance due to security concerns.”

Mr Robinson, referring to Mr McGuinness’s two previous meetings with the queen, said he was not surprised that they were able to hold a private meeting. “Once you cross the Rubicon it is not perhaps that surprising,” he said.

The queen and Prince Philip are tomorrow engaging in a busy series of events which starts with the morning visit to Crumlin Road jail. The queen is also travelling to the Game of Thrones set in the Titanic area of Belfast and is then visiting St George’s Market close to the city centre before going to Belfast City Hall where she will have lunch with the new SDLP lord mayor Nichola Mallon.

Tomorrow evening some 1,800 guests will attend a garden party hosted by the queen at Hillsborough Castle.

On Wednesday, before taking a helicopter to Coleraine for first World War commemorations, she will briefly meet the BBC’s Antiques Roadshow team.

They are visiting Hillsborough Castle on Thursday to examine and value antiques and collectables from the Northern Ireland public.