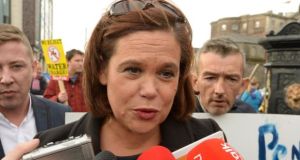 Ms Burton, writing in the Irish Times, said Labour would help those still in the grip of recession. Mr Kenny, in the ‘Irish Independent’, said the threshold for paying the USC would be raised.

“I think at this stage the Taoiseach and indeed the Tánaiste will probably promise to do just about anything if it will see a bounce in their poll ratings,” Ms McDonald said.

“The Taoiseach and the Government should understand that if they want to do one single thing now that would be of assistance to low and middle-income families they should just scrap the water charges.”

Speaking at her constituency office on Dublin’s Amiens Street this afternoon, Ms McDonald said: “I think what we’re seeing playing out now is more a propaganda initiative rather than any change of heart by this Government.”

She said the Government parties’ attention had turned to the next General Election.

“In that context they need to understand that the issue of water charges hasn’t gone away. They would be very foolish to imagine that that were the case,” she said.

Turning to possible coalition options in the aftermath of the General Election, Ms McDonald said her preference would be for Sinn Féin to participate in a “distinctively Left government”.

She said Sinn Féin would have “very fundamental differences” with Fine Gael values, policy and approach and would have “issues” with Fianna Fáil. She called on the two parties to “kiss and make up”, adding that she believed Civil War politics was over.

“I would like to see Sinn Féin in Government as the larger party in any coalition arrangement. My personal view is that would be the only way in which we would guarantee we would have sufficient influence and sufficient clout,” she said.

“Any other set of circumstances, I think history reflects this well, that the smaller party in coalition arrangements kind of gets done over.”

Referring to the new party promised by former Fine Gael minister Lucinda Creighton and others, Ms McDonald said she would imagine Sinn Féin would have very significant policy differences with that grouping.

However, she said she wished them well and had not seen much as yet by way of policy documents.