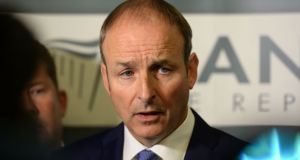 Fianna Fáil leader Micheal Martin was given a tumultuous reception by party supporters when he arrived at Cork City Hall where both his own Cork South Central and Cork North Central constituencies are being counted.

Fianna Fáil leader Micheal Martin was given a tumultuous reception by party supporters when he arrived at Cork City Hall where both his own Cork South Central and Cork North Central constituencies are being counted.

There were loud cheers and applause when Mr Martin flanked by his wife, Mary and children, Micheal Aodh (21) and Aoibhe (19) arrived into the main auditorium where the votes are being counted.

Mr Martin smiled broadly as he was hugged and embraced by women while men stuck out to their hands to shake his hand and congratulate him on his campaign which looks like seeing Fianna Fáil substantially increase its number of TDs from the 21 it had at the dissolution of the last Dáil.

But Mr Martin took time out to pause and sign an autograph book for young Oisín Sheehan from Donoughmore in Cork North Central.

“Oisín – Best Wishes Always – Micheál Martin,” signed the Fianna Fáil leader before going off to do a live interview with RTÉ.

Mr Martin said he expects the party to win 40 plus seats with the party then set to nominate him for Taoiseach but he refused to be drawn on who he would do business with afterwards. He insisted he would always put the country first.

He was asked whether he would be willing to go into coalition with Fine Gael if it meant saving the electorate from another election in the event of a hung Dáil.

“The country will always be first as far as Micheál Martin is concerned and we proved that in 2009 when we took decisions that were electorally and politically costly but in terms of the country were the right thing to do so obviously he country comes first in all our deliberations in this regard.”

Earlier Mr Martin had appeared to rule out any question of Fianna Fáil going into government with either Fine Gael or Sinn Féin even when pressed and it was pointed out to him that the only possible stable combination would be a Fine Gael/Fianna Fáil coalition.

“We don’t want to go into government with Fine Gael or with Sinn Féin- let’s wait until we know the final destination of seats because I think a lot of centre ground people are going to be elected as well – a lot of them are sensible and I think we can’t ignore our responsibility.

“To say that its down to two parties is to ignore the reality of how people have voted and we will have a certain number of seats that will allow us to do certain things and allow us take certain positions but it’s by no means the dominant position.”

“We have to listen to what the people have said and they haven’t voted for the traditional parties in the numbers that they used to - I want to take time out to reflect on that as well,” he added.

Both Mr Martin and running mate, Michael McGrath are on course to take the first two seats in Cork South Central according to tallies with Simon Coveney set to take the third seat for Fine Gael and running mate, Jerry Buttimer battling with Sinn Féin’s Donnchadh Ó Laoghaire for the last seat.