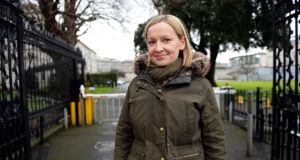 The leader of Renua Ireland Lucinda Creighton has rejected suggestions she had been “hiding” Eddie Hobbs during the election campaign or that his association with the party damaged its prospects.

Mr Hobbs is Renua’s party president but did not run as a candidate and played a low profile in the party’s campaign in the run up to the general election.

“Eddie has been a fantastic support and he done a huge amount of work for the party on policy. He’s the party president and I hold him in very, very high esteem,” she told Newstalk FMs Pat Kenny show.

Ms Creighton lost her seat in Dublin Bay South, with her party unable to secure a single seat after running 26 candidates in the general election in several constituencies.

Ms Creighton will no longer be able to lead the party having lost her seat and said Renua would need a new leader.

“We need a new direction and leadership in the party and a new figurehead and that will happen in due course,” she said.

“I think that the party has a future and I’m very proud of the people who are involved in it all over the country.”

Ms Creighton said she will remain involved with the party for the foreseeable future.

“I’m not making any rash decisions at this stage. We will have a national board meeting next week, a meeting with our candidates and reviewing the election this week,” she said.

“I’ve seen in the past, leaders leaving the party high and dry after a bad election result. I don’t intend to do that, I’m committed to the party and I will play whatever role is appropriate in the months and years ahead.”

Ms Creighton said she has no regrets about leaving Fine Gael and had no regrets in her political career.

“If the only objective is getting re elected to the Dáil then I probably could have got re elected if I’d have stayed in Fine Gael or if I had run as an Independent and spent the past two years filling potholes, fixing yellow lines and sorting out medical cards but I’ve always said that’s not what I’m in politics for,” she said.

“I tried, and it didn’t work out on this occasion but I have absolutely no regrets from that point of view. I have made a contribution and I’m looking forward to the next chapter in my life now,” she said.