Level of support for Coalition election win still out of reach 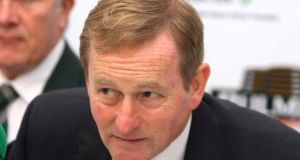 Taoiseach Enda Kenny: In the light of the continuing economic recovery, the main Coalition party might have expected another significant rise in support although the increase in Labour support will be a consolation. Photograph: RollingNews.ie

Taoiseach Enda Kenny will get mixed messages from the latest Irish Times/Ipsos MRBI poll if he looks to it for guidance about whether to go to the country in November or leave it until spring.

Support for the Coalition parties and satisfaction with the Government has remained remarkably steady since the last poll in May which showed a significant recovery from the low point of last December.

However, in the light of the continuing economic recovery, the main Coalition party might have expected another significant rise in support following the jump in the two Irish Times polls conducted in the first half of the year. Instead Fine Gael support appears to have plateaued although the increase in Labour support will be a consolation.

The message is that the level of support required to win the election is not there yet. Whether there is a better chance of it blooming in spring is something the Taoiseach will have to decide.

When the poll is broken down in regional terms one surprising finding is that Fine Gael support in Dublin has declined from 26 per cent in May to 19 per cent in September.

A decline of this magnitude has worrying implications for the party’s ability to hold on to most of its seats in the capital whenever the election is called.

There is some compensation in that support has jumped from 24 to 37 per cent in the rest of Leinster while it gets 30 per cent in Connacht-Ulster and 26 per cent in Munster.

Fine Gael is easily the leading party among the best-off AB voters but its lead among middle class C1 voters has declined.

In age terms, Fine Gael does best among the over-65s where it gets a solid 36 per cent. Its weak point is among the 25 to 34 age group while its strong point is the massive support it gets among farmers with almost half of them backing the party. The steady satisfaction rating of Kenny and the Government is another positive, although both ratings are quite modest by historical standards this close to an election.

In Dublin the party is on 13 per cent which is significantly above its national vote. It is on 8 per cent in Munster, 7 per cent in the rest of Leinster and 5 per cent in Connacht-Ulster.

In class terms Labour is now stronger among the better off AB and C1 groups than it is among the poorer C2 and DE categories.

If the party can make some further gains in Dublin between now and the election it will have a realistic chance of holding on to a number of the seats it won in the capital in 2011.

Fianna Fáil has mirrored the Government parties in remaining remarkably steady since the last poll in May with precisely 20 per cent of the vote in both. With support in Dublin at 14 per cent the party will be in a position to challenge for a number of seats.

It currently does not have a single seat in the capital but that should change on the basis of the poll.

While support for Sinn Féin, at 19 per cent, is down for the second poll in a row it is still strong in Dublin where it is marginally ahead of Fine Gael on 20 per cent.

There is a dramatic difference in support levels across the social classes with the party getting just 4 per cent among AB voters and 34 per cent in the poorest DE category.

Other regions are not as strongly Independent with 22 per cent of voters in Munster and Connacht-Ulster supporting the group and 19 per cent in the rest of Leinster.

There is a relatively even spread across the age cohorts and social classes indicating that the next Dáil is likely to have the biggest number of Independents and small party representatives in the history of the State.