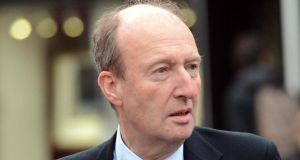 Independent TD Shane Ross said he was “delighted that the PAC finally saw sense and decided to allow the whistleblower in”. Photograph: Eric Luke/The Irish Times

Fine Gael and Labour members of the Public Accounts Committee have sharply criticised each other over the decision to allow a Garda whistleblower give private evidence about penalty points.

The surprise move came the day after Minister for Justice Alan Shatter called for an investigation into the debacle by the Garda Síochána Ombudsman Commission.

Mr Shatter also questioned the PAC’s remit to inquire into penalty points, and last night’s decision was characterised by one Fine Gael TD as a “snub to Shatter”.

Fine Gael committee members, who largely wanted the hearing called off, claimed they were let down at the last minute by Labour TDs, who preferred to let Sgt McCabe give evidence in private.

“Labour messed us around,” said one TD, while a Labour deputy said: “The Fine Gael guys looked around the room and realised they couldn’t win the vote. Our position was you couldn’t disinvite someone who had been invited. The public wouldn’t wear it.”


Unforseen repercussions
Senior Garda sources told The Irish Times they were disappointed at the PAC’s actions, saying they believed the issue had moved on substantially with the GSOC opening an investigation. Some of these sources suggested the invitation represented a challenge to the Garda’s internal command structures and discipline that would have unforeseen repercussions. However, others in Garda Headquarters said Garda Commissioner Martin Callinan had no plans at this time to go to the courts to seek an injunction to stop the hearing.

At the PAC meeting, almost all Government TDs questioned why the PAC was taking on this work, but eventually agreed to allow the private session in order to avoid a contentious vote.

Independent TD Shane Ross and Sinn Féin’s Mary Lou McDonald called for a vote, and PAC chairman John McGuinness is understood to have sided with them.

The PAC traditionally does not split for votes, and sources claimed they did not want to create division. “It’s pointless since he will tell us nothing we don’t know but the view was not to establish precedent of a vote,” one source said. “It would undermine the integrity of the committee”.

Ms McDonald, who wanted the hearings to be held in public, said: “I am glad in the interests of fairness he can give his account.”

Mr Ross said he was “delighted that the PAC finally saw sense and decided to allow the whistleblower in”.

Melissa English, the parliamentary legal adviser, told the PAC they could bring in Sgt McCabe, but he is restricted in what he can discuss.

“We can discuss culture, lax behaviour of system, the operation of the system but he cannot allege anything unlawful or corrupt,” said one TD. “If he can’t allege any wrongdoing, then he will just be telling us what we know.”