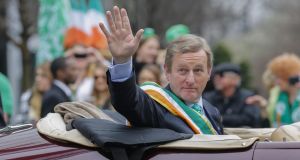 Taoiseach Enda Kenny has during his St Patrick’s Day trip to the US said he disagreed with Australian prime minister Tony Abbott, who has been widely criticised for his video message to Irish ex-pats in Australia in which he mentions drinking Guinness. Photograph: Erik S Lesser/EPA

Mr Abbott was widely criticised recently for his video message to Irish ex-pats in Australia in which he mentioned drinking Guinness.

Mr Kenny spoke to reporters on Monday after attending a private meeting at the US Chamber of Commerce on Washington’s H Street, within view of the White House.

“There has been a long-term view of a stage Irish perception. I reject that.

“I think it’s really important that we understand that we have a national day that can be celebrated worldwide, St Patrick’s Day.

“And I think it’s important that people enjoy that celebration - but that they do it in a responsible fashion.”

Asked for his views on Mr Abbott’s video, Mr Kenny said he did not agree with what the Australian prime minister had said.

“I’ve heard the prime minister’s comments. He made them. I don’t agree with that.

“I think that it’s perfectly in order for so many Irish people in Australia to have a very enjoyable celebration of St Patrick’s Day and St Patrick’s week and to do so in a thoroughly responsible fashion.”

The Australian prime minister jokes in the video that “this is the one day of the year when it’s good to be green. As you can see I’ve got my green tie on for the occasion.”

Mr Abbott says of the foundation of Australia that: “It’s been said of us that the English made the laws, the Scots made the money and the Irish made the songs.

“I’m sorry I can’t be there to share a Guinness or two, or maybe even three, but like you I do rejoice in St Patrick’s Day,” the prime minister concludes.

Mr Kenny added the Government intended to introduce a minimum pricing order for alcohol at the same time as it was introduced in Northern Ireland.

Mr Kenny met with president and chief executive of the US Chamber of Commerce, Tom Donohoe, who is due to be honoured at the American Ireland fund dinner on Monday night, and private business representatives.

1 Coronavirus: Cabinet meets to consider advice over actions to take in Midlands as cases rise
2 Officials refuse to rule out ‘Midlands lockdown’ following Covid-19 surge
3 Second Midlands GAA club shuts down activity after outbreak among players
4 Masks Q&A: Who has to wear them in shops and what happens if you don’t?
5 Reopening of schools in many EU countries has not led to Covid-19 increase, ECDC report finds
Real news has value SUBSCRIBE