Final decision on filling judicial vacancies will remain with Cabinet 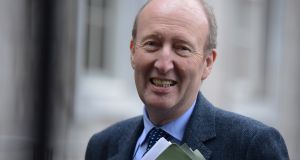 Reform of the judicial appointments system was a key demand of Independent Alliance TD Shane Ross in negotiations that led to the minority government. Photograph: Cyril Byrne

A new system for appointing judges forms a key element of the programme for government, but the final decision on filling judicial vacancies will remain with the Cabinet.

There is a commitment in the programme for the introduction of legislation to replace the Judicial Appointments Advisory Board with a judicial appointments commission. The new structure will include a reduction in the current membership of 12, and an independent chair instead of the Chief Justice, who will be selected by the Public Appointments Service and approved by an Oireachtas Committee.

Reform of the system was a key demand of Independent Alliance TD Shane Ross in negotiations that led to the minority government. There is a commitment to have a lay majority on the new commission including independent people with specialist qualifications.

The current board contains 12 members: five of them judges; the Attorney General; a member of the Bar Council which represents barristers and of the Law Society representing solicitors; and four others including the secretary.

There is a further commitment to reform the appointments process to ensure it is transparent, fair and credible.

There are detailed commitments for political reform including a revamp of the Seanad. The programme says significant reform of the Seanad is long overdue and it contains a commitment to the implementation of the Manning report. That report, which emanated from a committee chaired by former leader of the Seanad Dr Maurice Manning, recommended all citizens should be able to vote in Seanad elections.

The programme also contains commitments for Dáil reform. There is a pledge to have a more focused committee structure, with exclusive time for committee meetings.

A new parliamentary investigations unit will be established with an independent office to assist members and committees on budgetary matters. The role of the independent legal adviser to the Oireachtas will be strengthened.

There will be mandatory pre-legislative scrutiny for all new Bills and post-enactment review of legislation by Oireachtas committees.

There are also changes in the conduct of Dáil business with measures to facilitate the establishment of more technical groups. A timeline for the passage of Bills through the Dáil will become a feature.

Chinese vase valued at €800 sells for €1.2m at Irish auction