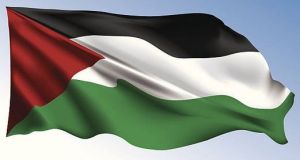 Members of the Jewish community in Ireland are concerned at plans to fly the Palestinian flag above Dublin City Hall for the month of May, the Israeli ambassador has said.

In a letter lobbying city councillors ahead of a debate on the plan, Ze’ev Boker said it would be “highly politically charged” and demonstrate a one-sided approach by the council to the conflict.

Mr Boker’s comments come ahead of a debate in Dublin City Council on May 8th on a motion by People Before Profit councillor John Lyons, who said the gesture should be made to mark the 50th anniversary of the Israeli occupation of the West Bank.

Mr Lyons has said the move would support communities living under a form of “apartheid, worse than South Africa”.

The Israeli embassy previously condemned the motion, saying it would be “counter-productive”.

However, writing in the build up to the debate Mr Boker said he was willing to meet with elected representatives to press home his concerns.

“Dublin has a long and proud tradition of welcoming new communities, and I know of many Israelis who have come to Dublin for work reasons and decided to stay,” he wrote.

“We must ask what kind of message such a gesture sends to these Israelis who are proud to now call Dublin their adopted home?

“I also know that some members of the Irish Jewish community are concerned by the negative message that the flying of the flag promotes.”

Mr Boker said the embassy would be “delighted” to assist in an alternative initiative aimed at bringing Israelis and Palestinians together to “promote understanding between our peoples”.

He urged the the councillor to reject the motion.

Earlier this month Mr Lyons said he was confident of the support of colleagues and members of other political parties in passing it.