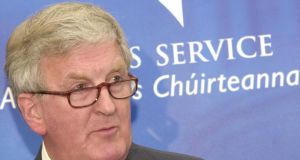 The Government has granted Mr Justice Nial Fennelly more time to complete his investigation into the recording of telephone calls in and out of Garda stations.

Mr Fennelly wrote to Taoiseach Enda Kenny seeking a brief extension until the end of the year.

It is understood the judge is well advanced in his work but needs some additional time.

This is the second extension Mr Fennelly has requested. He had been given until the end of September to complete his work but that will not stretch to the end of December.

The judge had also examined issues around the departure of former Garda commissioner Martin Callinan.

He is now focused solely on the revelation that telephone calls were recorded in and out of prison.

The inquiry, it is understood, has cost €3.6 million to date to carry out its work.

When established, the commission was allocated a budget of €2 million but it was expected to finish its work by the end of 2014.

The Department of Public Expenditure has previously declined to give details on legal costs or other expenses paid to the judge or his staff.

It said the terms and conditions were agreed and sanctioned by the department.