Analysis: Adams has called on Labour to cease alliance with conservatism 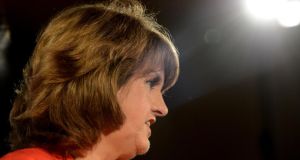 Shortly after the Tánaiste Joan Burton became leader of the Labour Party, Sinn Féin president Gerry Adams called on the junior coalition partner to “cease its alliance with the forces of political conservatism”.

It was not the first time Mr Adams has suggested Labour should opt out of Government, but the timing of his latest pronouncement demands a fresh assessment of the sincerity or otherwise of such statements.

He said Labour should “work with Sinn Féin and others on the left to build an alternative to Fine Gael and Fianna Fáil” when he addressed a Sinn Féin event in Monaghan on Saturday night.

During the recent Labour leadership hustings, Ms Burton adopted a harsh rhetoric in relation to the Opposition party and repeatedly referred to what she described as “the nexus between Sinn Féin and the IRA”.

In Mr Adams’ address on Saturday night, he said Ms Burton should not be allowed to “distance herself” from what he called the “disastrous policies” of this Government.

Of course, this very ability has been the secret of Ms Burton’s success to date. Her personal popularity ratings with the public have remained high while the general perception of the Government has plummeted.

Mr Adams wished Ms Burton well in her new job before going on to describe her as “one of the architects of austerity”.

The list of unpopular policies with which Mr Adams said she should be associated, and which Sinn Féin has railed against, is long: “water charges; the property tax on the family home; the cuts to child benefit; the removal of medical cards; the cuts to health and welfare” and so on.

After all that, he said what the Labour Party needed to do now was: “End its alliance with conservative parties; stand up for working families; become the party Connolly founded and agree to work with Sinn Féin and others of like mind on the left, to build a radical alternative to the conservatism of Fine Gael and Fianna Fáil.”

But does he mean it? Surely such an approach rings somewhat hollow after a series of stinging criticisms.

No, insist Sinn Féin strategists, he is “quite sincere”. They say they believe that Labour’s proper place in the Irish political spectrum is within a broad coalition of left-wing parties.

“They have an opportunity to work with Sinn Féin and others on the left in a left-led Government. The real politick is that if they don’t do that they’re going to get hammered,” they say.

The party’s job is not to “prop-up” a Fine Gael- or Fianna Fáil-led government but to create an “alternative” Government on the left.

It would certainly represent an interesting re-alignment of the domestic political landscape. However, under Ms Burton’s leadership, the proposal seems a non-runner, as she has categorically ruled out “making up the numbers” with Sinn Féin in any future government.