Ian Paisley: a firebrand who learned to compromise

Bigoted yet brilliant, Paisley had to move away from a world of absolutes 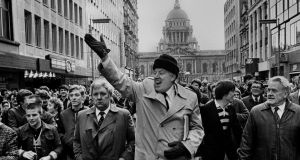 Ian Paisley at a rally on Royal Avenue outside Belfast City Hall in 1974. “Paisley the politician defeated Paisley the preacher.” Photograph: Trevor McBride

In 2006, about a year before Ian Paisley stunned the world by going into government with Sinn Féin, I was talking to a clearly troubled senior member of his two organisations – the Democratic Unionist Party and the Free Presbyterian Church.

He told me privately that he felt that his leader was grappling with a profound dilemma: “There’s a conflict between our politics and our theology. Our politics tell us that we must never relent on our opposition to Sinn Féin/IRA. But our theology tells us that Jesus Christ will forgive all sins for those who repent. We’re torn between the need to hold the line politically and the idea of redemption that is at the heart of our faith.”

Liberals, he said, could never understand that Ian Paisley and those who followed him really took their faith seriously, and that its demands might propel them into places they would not otherwise dream of going.

He was right, of course: Ian Paisley and Paisleyism were a closed book, not just to Irish Catholics but to British and European politicians.

The infamous episode of Paisley trying to howl down Pope John Paul II in the European Parliament in 1988, bellowing about the Antichrist, is instructive for the disgust on the faces of the parliamentarians. Paisley seemed, as in some respects he was, a throwback to the horrific religious wars of the 17th century from which modern Europe itself emerged. The huge roaring hulk of this rabble-rousing preacher was a nightmare figure from the repressed memory of the Thirty Years War.

There was only one thing to do with him – get him out as fast as possible.

That impulse was in one sense quite proper. It would be ridiculous to sentimentalise Ian Paisley’s career. Most of it was characterised by sectarian bigotry, by hatred of liberals and homosexuals (he started the Save Ulster from Sodomy campaign in 1977) and by a relentless exploitation of the fears that he himself did so much to stoke.

His formidable talents as an orator, his brilliant instincts for agitation, his instinctive understanding of publicity, his broad but biting wit, his enormous charisma – all of these were deployed largely for the destruction of any non-sectarian common ground in Northern Ireland.

From Terence O’Neill to David Trimble, he haunted every unionist compromiser like an accusing ghost, pointing his finger at treason, sell-out and accommodation with an enemy that was not just political but spiritual. He inflamed the passions of a specifically Protestant paranoia, drawing his biblical inspiration much more from the Book of Revelations than from the Sermon on the Mount.

His greatest talent was for simultaneously stirring up trouble and disavowing its consequences.

He cannot be absolved by the remarkable events of his latter years from significant responsibility for the horrors that preceded them.

And yet it was always wrong to think of Ian Paisley merely as a terrible throwback to a dark past. He may have been an anachronism in post-war secular western Europe, but he was hardly so in the context even of the United States, let alone much of the developing world.

The preacher-politician may be an awkward presence in contemporary life but it is, after all, a category that includes Mahatma Gandhi and Martin Luther King. Paisley tapped in to the dark, apocalyptic strain in Calvinism but he also, in his own way, embodied a version of the democratic and dissenting traditions of Presbyterianism.

Perhaps his historic volte-face in 2007 was not so much a sudden conversion to the politics of compromise but more the resolution of a long-term conflict between these two sides of Paisley’s faith. The dark strain was elitist and exclusive – Paisley believed that those who were saved were the Elect, an elite at war, not just with the Catholic Antichrist but with liberal Protestants. The more democratic strain had to recognise another, more mundane kind of Elect – those who got themselves elected at the ballot box.

In the end, it wasn’t so much that Paisley’s theology conquered his politics as the other way around. Paisley the politician defeated Paisley the preacher.

The firebrand preacher saw the world in absolutes – the saved and the damned – between which there could be no compromise. The clever, immensely effective politician gradually realised that he did not wish to be confined to such a worldview. Politicians are drawn inexorably towards power and Paisley understood that the road to power lay through all of the things that his theology despised – compromise, openness, accommodation.

In a sense he was too good a politician for his own religious convictions. He found that he could build alliances as well as destroy them. He could make himself the primary leader not just of Calvinist Ulster but of the much broader political community of Protestant Ulster. It was a large leap from there to becoming first minister in alliance with Sinn Féin – but not an unprecedented one.

As it happened, Ian Paisley’s most dangerous qualities were also his saving graces. He saw himself as “God’s anointed” and as late as 2007, his wife Eileen called him a modern-day Moses.

This grand self-image gave him the arrogance to wreck any plan that was not his own.

But a Moses can’t let his people wander in the desert forever – he has to lead them somewhere.

Ian Paisley brought his followers if not quite to the promised land then at least to a land that holds some promise.