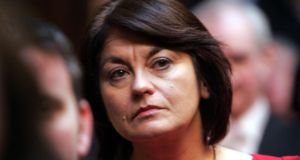 Senator Fidelma Healy Eames was challenged to produce any evidence that any US state had banned Mother’s Day. On Monday, the Senator told Newstalk’s Pat Kenny Show she had made “one” error in sending out the tweet. File photograph: Cyril Byrne/The Irish Times

Senator Fidelma Healy Eames has admitted she made a mistake when sending out a tweet claiming Mother’s Day and Father’s Day were banned in some states in the US.

The Independent Senator from Galway posted a message on Twitter on Sunday expressing doubt that families could continue celebrating Mother’s Day in the event of the same-sex marriage referendum being passed.

She claimed that in some US states, Mother’s Day and Father’s Day was banned.

The tweet provoked strong responses from other political parties and also from groups campaigning for a Yes vote in the referendum in late May.

Ms Healy Eames was challenged to produce any evidence that any US state had banned Mother’s Day.

On Monday, the Senator told Newstalk’s Pat Kenny Show she had made “one error” in sending out the tweet.

“I did make one error... I said in some US states, I meant some schools,” she said.

She cited the example of one school in Nova Scotia (in Canada) and another in Manhattan, where she claimed the use of the terms had been banned so as not to offend gay parents.

She added a school in Rome had imposed a similar rule.

The admission amounted to a substantial withdrawal of the content of the tweet published on Sunday, which Yes campaigners contended was a scare tactic designed to dissuade people from supporting the referendum.

The tweet in question from @senhealyeames said: “Happy Mothers’ day all! Hope we can continue to celebrate it after #SSM passed. In some US states Mothers & Father’s Day banned #pcgonemad”