Greens will hope to breach 2 per cent of national vote

Party profile: Almost wiped out in 2011 securing State funding is a must for the party’s long-term recovery 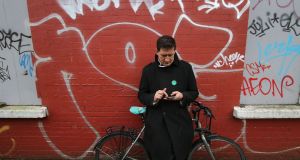 The Green Party was devastated in 2011, losing all six seats in the Dáil. To compound its difficulties, its national support level fell below the critical 2 per cent, which meant it was no longer entitled to State funding.

It has been a hard road back for the party under new leader Eamon Ryan, with incremental growth and a setback or two along the way.

It has gone back to its roots with a strong emphasis on climate change issues, local planning and ethics and has managed to attract a legion of young activists, who are unconcerned about the meltdown of five years ago.

The party did comparatively well in the 2014 local elections, winning 12 seats. It had high hopes that Ryan would win a seat in the European elections but he lost out to Nessa Childers. The former minister now represents the party’s best chance of winning a seat in the new constituency of Dublin Bay South.

Several candidates have an outside chance, including Catherine Martin in Dublin Rathdown, Mark Dearey in Louth, Malcolm Noonan in Carlow-Kilkenny and Grace O’Sullivan in Waterford. However, a win for the party will be securing one Dáil seat and getting over 2 per cent of the national vote, allowing it sufficient funding to consolidate for the long term.