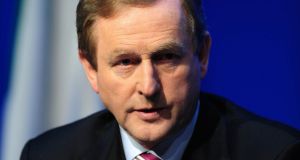 Taoiseach Enda Kenny was adamant on Wednesday that collective Cabinet responsibility would apply to all members of the Government. Photograph: Aidan Crawley/Bloomberg

All Government TDs will oppose a Sinn Féin Bill to enshrine neutrality in the Constitution following an agreement between Fine Gael and the Independent Alliance.

At the Cabinet meeting on Tuesday, Independent Alliance Ministers sought a free vote on the issue but agreement has been reached on the wording of an amendment which will allow the Government to oppose a second reading of the Bill.

Taoiseach Enda Kenny was adamant on Wednesday that collective Cabinet responsibility would apply to all members of the Government.

“This is not an issue that I think should be considered other than being very collectively responsible in a matter which is of very great importance to the country,” he told reporters.

The Taoiseach said that he had made the point on many occasions that neutrality was a matter of fundamental Government policy.

“The idea of transferring all of that responsibility for determination by the courts would, I think, if it were ever implemented by a referendum would mean unforeseen difficulties in so many areas for the country,” he said.

Mr Kenny said Irish neutrality had been protected when the people of the country voted for the Lisbon Treaty which contained a protocol very clearly protecting Irish neutrality.

Minister for Foreign Affairs Charlie Flanagan has argued strongly that the authority of the executive to conduct external relations needs to be protected.

He took the view that the Sinn Féin Bill as currently framed could constrain the Government in fulfilling its obligations to supported actions mandated by the United Nations, in particular peace enforcement operations.

Minister for Social Protection Leo Varadkar conceded on Wednesday there had been “a robust discussion” at Tuesday’s Cabinet meeting about neutrality but reports of a row had been exaggerated.

Independent Alliance Ministers Shane Ross and Finian McGrath had fought in favour of a free vote, insisting that the issue was not covered by the Programme for Partnership.

However, Mr Kenny and Mr Flanagan resisted such a move and demanded the alliance adhere to Cabinet collective responsibility.

The Sinn Féin Bill provides for a referendum to enshrine Ireland’s neutrality in the Constitution.

The party had tabled similar legislation in 2015 and Mr McGrath, Mr Ross and Minister of State John Halligan voted in favour of it while opposition TDs.

The compromise between Fine Gael and the Independent Alliance will allow the Government to oppose a second reading of the Sinn Féin Bill.