Government has no interest in real political reform 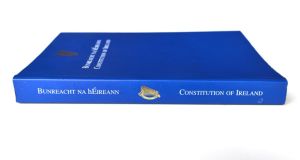 Nearly 80 years ago (in 1934) Éamon de Valera initiated the abolition of the Seanad and immediately ran into objections that this was a breach of guarantees given in 1922 to Southern unionists. Responding to this claim, de Valera said he favoured some form of constitutional arrangement whereby fundamental rights could be enshrined in the then Free State constitution, without being subject to amendment or abolition by the legislature.


Constitution committee
De Valera wanted to constrain the power of the Oireachtas and of the government to negative key constitutional provisions and he established a constitution committee in 1934 to consider what amendments might be made to the 1922 constitution and how certain provisions could be rendered immune from change by a simple Dáil majority. This committee included Stephen Roche, then secretary of the Department of Justice. It recommended the drafting of an entirely new constitution. De Valera expressed his opposition to this but then quickly changed his mind and the 1937 Constitution was set in train.

Roche was sceptical of the idea of a written constitution impervious to change by the elected representatives of the people and binding on future parliaments and future generations of the Irish people. There is an interesting point there which, in the present context, might be framed as follows: why should this generation of Irish people be bound by a Constitution they have had almost no part (aside from occasional referendums) in framing or authorising? Only those now aged 97 and upwards could have endorsed the 1937 Constitution that binds us all.

In the course of drafting the new Constitution, de Valera played a significant part, drafting individual articles, amending others and overseeing the entire project from a well thought-through perspective. This is brilliantly conveyed in The Origins of the Irish Constitution , by Gerard Hogan, published recently by the Royal Irish Academy.

I don’t think any other taoiseach, with the possible exceptions of John A Costello and Garret FitzGerald, would have had the capacity or even the interest to make a contribution such as de Valera did and I suspect none would have had the deftness to fend off the Vatican, the Irish bishops and Jesuits as did de Valera. The Vatican was displeased with the final version, contrary to the settled perception that the 1937 Constitution was a Catholic handbook.


New constitution
There is a persuasive case, I think, for a constitution to be drafted anew every 30 years or so and then re-authorised by the people, in the light of experience and prevalent values. That prospect seemed to be offered in the last election campaign by the parties now in government but, like so much else, that promise has much disappointed. All the more so since significant change is necessary.

I think there are three ways of fixing that: via a constitutional provision making it an offence to interfere with the conscientious vote of a parliamentarian (ie getting rid of party whips); providing in the Constitution for an entitlement of a “decisive minority” of parliament to institute an inquiry into any aspect of government policy or decision; or having the Seanad directly elected by the people on the basis of the European Parliament constituencies and enabling the Seanad to block all legislation and decisions and to institute legislation and inquiries (in most instances, the government of the day would not have a Seanad majority and would therefore not be able to evade accountability). One or other of these arrangements operates in several European countries.

A second important reform would be to give the courts the power to give substance to what are called economic and social rights. As we have seen recently, the Portuguese constitutional court voided on such grounds a recent budget passed by parliament.

But none of this will happen because there is a strong determination in government to avoid accountability. Anyway, aside from unblocking the courts and getting rid of the Seanad, there is no interest in doing anything of consequence.