Gilmore says water charges will not be introduced next January 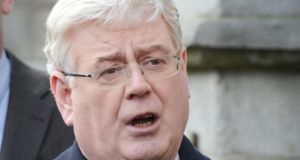 Tánaiste Eamon Gilmore has insisted a reshuffle is not under consideration and has defended his role as Minister for Foreign Affairs. Photograph: Alan Betson

Water charges will not be introduced in January of next year, Tánaiste and Minister for Foreign Affairs Eamon Gilmore has insisted.

“We have always said that water charges will be based on a metering system and my understanding is that there will not be sufficient metering done by January to allow a charging regime to come in,” he said.

Minister for Finance Michael Noonan and Minister for Public Expenditure Brendan Howlin would be discussing a new target date for the introduction of the charges with the troika, he said.

His comments come days after Minister for the Environment Phil Hogan said he was operating on the basis that the official date for commencement of water charges remained January 1st as per the agreement negotiated with the troika by the Fianna Fáil-led government in 2010. However, Mr Gilmore yesterday said the comments had been misinterpreted.

Asked on the opening day of a trade mission to Turkey about estimates that the metering system would not be installed until 2016, Mr Gilmore said the meters were going to be “introduced over a period of time” and they would not be in place by January 2014. An independent public procurement process would select the entity that would install the meters.

Minister of State for Finance Brian Hayes also cast doubt on the introduction date. He said Mr Hogan had made clear the issue would be discussed again at Cabinet.

“There is a lot of work to be done on it and we have to get it right,’’ said Mr Hayes. He added that paying for water would be a reality in the State, adding that “when it is going to happen is a matter for Government’’.

Mr Hayes said he would be worried about its introduction before the installation of meters, with people paying flat rates. “I think it is important that the system is clear and transparent for everyone.’’

There were, he said, three hurdles to be crossed: an agreement on the free allowance, those exempted on the basis of their medical condition and how the regulator would have public consultations on the setting of a tariff.

Meanwhile, Mr Gilmore said a reshuffle of Labour Ministers when the EU presidency concluded in June was not under active consideration.

Mr Gilmore contacted his TDs and Senators last week in the aftermath of Labour’s poor showing in the Meath East byelection and the resignation of MEP Nessa Childers from the parliamentary party.

A number were left with the impression that he was prepared to consider transferring from his foreign affairs and trade post to a domestic portfolio within months.

However, Mr Gilmore yesterday said that foreign affairs and trade “is a domestic ministry” as no country in the world was as dependent on the outside world as Ireland.

Asked about unease in the party about its influence in Government, he contrasted Ireland with other countries in economic crisis that had seen cutbacks in public services of up to 30 per cent.

He did not believe the party faced “annihilation”. It had to do what was right for the country and not what was in its electoral interests. “I challenge those who make the case that we should prioritise the Labour Party’s electoral advantage . . . At the end of the day there are things that matter more than votes in the ballot box.”