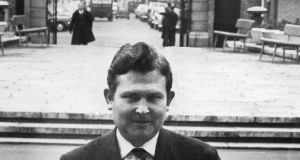 He represented Kerry South from 1966 to 1997, holding the record for the longest serving TD in the constituency.

His election to the Dáil in a keenly contested byelection was Jack Lynch’s first electoral test as taoiseach after he succeeded Seán Lemass.

Mr Lynch appointed him minister of state at the Department of the Environment when Fianna Fáil returned to power in 1977.

He served until 1979 when he was dropped by Charles Haughey after he voted for George Colley in the Fianna Fáil leadership contest.

Earlier this year, Mr O’Leary published his autobiography, On The Doorsteps, Memoirs of a long-serving TD, in which he strongly criticised the Haughey era in Fianna Fáil. He claimed the former taoiseach could be “vindictive” and many of his supporters were thugs.

“Looking back on my political career, I would like to think that the balance sheet would have more positives than negatives,’’ he wrote.

He was a close friend of former taoiseach Brian Cowen who launched the book in Killarney.

Mr O’Leary, who died in the Mater hospital, in Dublin, is survived by seven sons and 10 grandchildren. He was predeceased by his wife Judy.