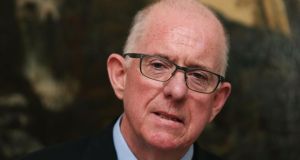 Minister for Foreign Affairs Charlie Flanagan: “A ceasefire without action on the blockade will not give rise to a lengthy cessation of hostilities so the lifting of the blockade is fundamental.” Photograph: Brian Lawless/PA Wire

Minister for Foreign Affairs Charlie Flanagan has called for an immediate ceasefire in Gaza linked to an ending of the Israeli blockade of the area.

“A ceasefire without action on the blockade will not give rise to a lengthy cessation of hostilities so the lifting of the blockade is fundamental,” Mr Flanagan said.

The Minister, who yesterday had his third conversation in a little over a week with Egyptian foreign minister Sameh Shoukry to explore the prospects of a ceasefire, said that since his appointment three weeks ago he had been at pains to express the desire of the Irish people to see an end to the “wholly unacceptable killing” in Gaza.

“I have met the Israeli ambassador here on a number of occasions in Iveagh House and I have conveyed to him in no uncertain terms the revulsion on the part of the Irish people at what is appearing on our screens daily.

“In my most recent meeting I asked that he immediately following the meeting convey a strong message from the Irish Government to my counterpart, Mr Lieberman, and directly to the office of the prime minister, Netanyahu, which I understand that he did,” said Mr Flanagan.

He added that last week at the EU council of foreign ministers in Brussels agreement had been reached on a strong resolution condemning acts the violence. “On behalf of the Irish people I intervened strongly at that meeting in furtherance of that agreed resolution,” he said, adding that the fact the resolution was agreed without dissent was significant.

“On Wednesday of last week, there was the UN vote. I think the vote must be seen in the context of the EU council of foreign affairs on Tuesday. Ireland’s position at that meeting was that we were most anxious to ensure the wording of a resolution that would be passed without dissent.”

Responding to criticism of the Government for abstaining along with other EU states in a vote at the UN condemning the Israeli actions in Gaza, Mr Flanagan said the resolution was not balanced. “The Palestinian proposal was unbalanced and not comprehensive as presented. Our permanent representative made strenuous efforts throughout the day with our EU colleagues and beyond to achieve balance,” he added.

Mr Flanagan said that in a conversation with UN secretary general Ban Ki-moon earlier this week, he had conveyed to him the views of the Irish people and offered humanitarian assistance such as food and shelter and power and fuel.

“I was very pleased last week that myself and Minister Seán Sherlock made available a further amount of €500,000 by way of direct aid. This will go to UNRWA [United Nations Relief and Works Agency] for direct aid on the ground and that is on top of €10 million that we provide directly by way or relief and support to the Palestinian people.”

Asked about his role in the Oireachtas Ireland-Israel Parliamentary Friendship Group, Mr Flanagan said he was a member of a group that had met in 2009 and 2010 and included TDs Ruairí Quinn, Lucinda Creighton and Joanna Tuffy. He said this cross-party group acknowledged the right of the democratic state of Israel to defend itself and its territory against indiscriminate rocket fire from organisations such as Hamas or other military groups.

He said the group had not met for a long time and as Minister he would not be involved in any parliamentary caucus but would represent the views of the Irish people. “I condemn the disproportionate and indiscriminate attacks on Gaza and I have made that position clear,” he said.