FitzGerald forced to pay for Bilderberg trip out of own funds 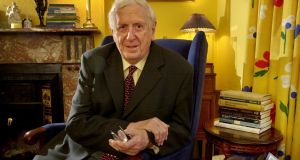 A parliamentary question tabled about taoiseach Garret FitzGerald’s attendance at the Bilderberg conference in Scotland in 1986 was ruled out of order after the taoiseach accepted his expenses should not be paid out of public funds.

Dr FitzGerald had been criticised by Fianna Fáil leader Charles Haughey and by Workers Party TD Proinsias De Rossa in the Dáil the previous year after his attendance at the Bilderberg meeting in New York.

The Bilderberg Group describes the meeting as “an annual three-day forum for informal discussions designed to foster dialogue between Europe and North America”. The organisation has been accused of being secretive and elitist.

During the New York trip in May 1985, the taoiseach had also held what he described at the time as “an important meeting” with then secretary general of the United Nations, Perez de Cuellar.

Mr Haughey and Mr De Rossa had later questioned the taoiseach in the Dáil on whether he had attended the Bilderberg meeting in a personal capacity, with the Fianna Fáil leader saying it was a “totally untenable and unacceptable position”.

Dr FitzGerald attended the conference from April 25th to 27th, 1986 at Gleneagles. Topics discussed included the foreign policy implications of the Soviet Union under Mikhail Gorbachev, the western global response to the “Soviet challenge”, the fragmentation of the world economy, and terrorism.

Mr De Rossa sought to table a question about the Scotland meeting for answer on May 6th, 1986.

A note to the taoiseach from assistant secretary Wally Kirwan on May 5th, contained in the Department of the Taoiseach’s files, recalled the controversy of the previous year. A later note states that the taoiseach had “accepted that the expenses involved should not be paid out of public funds”.

Largely on that basis, the Ceann Comhairle had ruled the question out of order.

Dr FitzGerald had told the Dáil in 1985 that the idea that the Bilderberg meeting represented “a sinister – or even a secret – plot to undermine the neutrality of non-members of the North-Atlantic Alliance or democracy in the West would come as a very big surprise indeed to the members of government of other neutral countries”.

1 George Floyd: police crack down forcefully as protests sweep US
2 Quarantine will cease within fortnight, Ryanair CEO claims
3 Irish tourists excluded from visiting Greece as country begins its tourism season
4 ‘I have no faith in the Catholic Church but I prayed when I’d Covid-19’
5 Coronavirus: Global cases pass 6 million as death toll reaches more than 369,000
Real news has value SUBSCRIBE