Ceann Comhairle Seán Barrett has withdrawn his comments that the Opposition was attempting to undermine him. 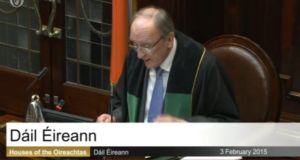 Fine Gael ministers privately discussed what course of action they should have taken if Ceann Comhairle Seán Barrett resigned yesterday.

Fine Gael ministers privately discussed what course of action they should have taken if Ceann Comhairle Seán Barrett resigned yesterday.

The ministers discussed the issue at their weekly pre-Cabinet meeting, and the prospect of reforming the system of appointing a Ceann Comhairle was also raised.

Currently, the Taoiseach nominates the Ceann Comhairle and the Taoiseach’s nominee usually wins a vote in the Dáil because of Government backing.

There have been calls recently for the position to be filled by secret ballot and the Coalition considered such a move earlier in its term of office but backed away from it. The Constitutional Convention also called for a secret ballot and other reforms to how the role operates.

It is understood there was a short discussion among Ministers in the senior Government party about what approach to take if Mr Barrett resigned or was forced to leave his post.

Sources said some of those present favoured maintaining the existing system, where the Ceann Comhairle is effectively chosen by the Taoiseach, while the majority favoured an open contest where numerous candidates could put their name forward.

Such a system would allow several candidates from both the Government and Opposition sides of the House to compete for the job.

However, there were differing views on whether the final vote would be by secret ballot.