The same sex referendum and ruling out a coalition with Fine Gael provided the big talking points on the 76th edition of the Fianna Fáil Ard Fheis. Michael O'Regan reports. 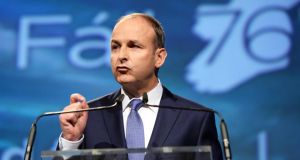 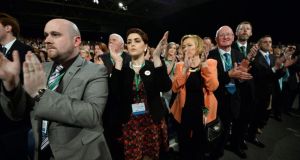 A cut in Universal Social Charge (USC) and increases in a range of social benefits have been proposed by Fianna Fáil leader Micheál Martin.

In his keynote address to the Fianna Fáil ardfheis in the RDS in Dublin, Mr Martin accused the Coalition of making the recovery as unfair as possible.

He attacked Sinn Féin for “promising everything to everybody” and for attempting to hijack the 1916 commemorations.

Mr Martin told delegates at the 76th Fianna Fáil ardfheis that the Coalition had not delivered the recovery - it was the Irish people who had done so through skills and dedication built up over decades.

He proposed a number of measures which he said would ease the burden on hard-pressed citizens. These included:

* An increase in mortgage interest relief from 30 per cent to 40 per cent.

* Increased PRSI benefits and reduced USC on the self-employed.

* Legislation to ban zero-hour contracts and to protect workers from

* The extension of social welfare protection to the self-employed.

* The introduction of a child care tax credit worth up to €2,000 per year to working families, and an additional month’s maternity leave.

“What this government actually did was to make the recovery as unfair as possible,” he said.

“They have made us a more divided society through their sustained, relentless policy of giving priority to the wealthiest few and hitting services relied on by the many,” said Mr Martin.

He said this was not just a political point but a fact confirmed by independent reviews of four budgets in a row.

“A government of spin and broken promises is now obsessed with trying to buy re-election. They just don’t get it. They are so out of touch and arrogant that they have absolutely no idea why people are so angry with them,” said Mr Martin.

He said every major crisis - in hospitals, in household debt, in housing, in town centres, in drugs, in class sizes, in low and zero hour contracts - had come about because the Government would not listen.

“Let me be clear, what Sinn Féin is offering is even worse. In the Republic they promise everything to everybody, while in the North they are implementing savage cuts which will decimate public services.”

He said Fianna Fáil would never settle for the idea that you could have either a strong economy or a fair society but not both.

“And it’s exactly because we understand the mistakes of the past that unlike others, we are determined that these mistakes will not be repeated.”

He said sound public finances were essential, and the biggest threat to them was the bidding war between a government desperate for re-election and parties who ignored the economy completely.

“Incredibly, the Government committee in charge of the banks hasn’t discussed mortgages with them for three years.

“Fianna Fáil has proposed an independent debt resolution office which is needed immediately - and so too is constant pressure on the banks to reduce their rip-off variable interest rates which are driving many families and businesses deeper into debt.”

Mr Martin said an Ireland for all was the central vision which inspired the men and women of 1916, and the centenary of their decisive action was a moment to recommit to their values.

He said the entire founding generation of Fianna Fáil emerged from the great men and women of 1916 and those who were closest to them.

“We take great pride from this, but we’re also clear that 1916 belongs to no party and no faction - it belongs to all of the people of Ireland.

“We will never accept the claims of a sinister movement founded 40 years ago to have any link with 1916. The Provisionals remain a movement which covers up the sickest of crimes in order to protect their members.

“We will never allow them to rewrite Irish history to legitimise their despicable crimes,” he said.