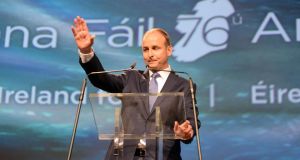 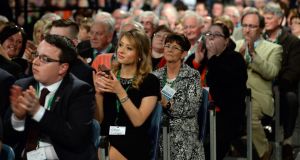 Make no mistake about it - the general election campaign is under way.

At least nine months out from the the polls, Micheál Martin used his party’s ardfheis to set out Fianna Fáil’s stall.

The leader used his 30-minute live keynote address to highlight a string of broken Coalition promises - before making a list of promises of his own.

The party wants to increase mortgage interest relief, extend welfare benefits to the self-employed and put more gardaí on the ground. But ultimately, who doesn’t want this?

If it was a fresh approach you were looking for, this speech didn’t provide it. It simultaneously offered very little, and a lot more of the same.

The party chief missed an opportunity to announce a big-ticket item to win over the public or to atone for their past mistakes.

Mr Martin used his chance to tear apart the Coalition’s record in Government, highlighting the Irish Water scandal, the health crisis and the mortgage arrears issue to remind Saturday night viewers of the error of Fine Gael and Labour’s way.

No amount of spin, fist pumps or photo opportunities can take that reality away, Micheál told delegates and the television audience.

And what of Sinn Féin? They would be a million times worse.

Gerry Adams’s party will promise you everything and deliver you nothing, Mr Martin said.

However, a notable aspect of the address was how little time he spent attacking the party’s main rivals.

The party leader has gone on the attack against Sinn Féin in recent weeks. If the weekend poll is any indicator, this approach might be proving counterproductive. Sinn Féin’s support has risen by 5 per cent.

No big loss for the party, but no big gain either after a bruising week for the two Government parties.

Martin’s message to delegates this weekend is that it is time to get focused, get on the ground and take the fight to every community in the country.

Mr Martin’s speech isn’t going to attract the masses to the party, but it may be enough to keep the grassroots happy for now.

He was eager to remind them that their party was founded from the great men and women of 1916.

This was a comment clearly aimed at Sinn Féin, as he stressed that no single party should be allowed to hijack the commemorations.

There was a brief mention of the Celtic Tiger and the collapse of the economy.

This was a warning against making the same mistakes again - something he said Fianna Fáil would be well placed to do, given their hands-on experience during the crash.

Martin did very little wrong with his speech. He looked good, he sounded well and he didn’t frighten the horses.

But if it was inspiration, energy or an alternative you were looking for from the RDS main hall, this didn’t provide it.

Martin is doing his best to juggle the diehard Fianna Fáilers who stayed with the party through thick and thin with the young guns who want a break from the past and a fresh start.

He used the speech to reassure the party faithful, rather than appeal to those outside the FF fold in the RDS. With time running out, he needed to do that.

Fianna Fáil and Micheál may have come through the worst of the storm but on tonight’s showing, there is a still some way to go.