Election 2016 count: Results and main points from across the constituencies

What to watch out for as the counts continue

Political Correspondent Harry McGee reports on a most unusual day for Irish Politics, a day when Fianna Fail rose from the ashes and when the parties of government suffered significant losses. Video: Bryan 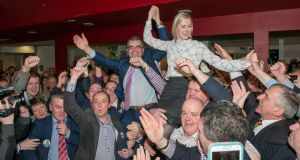 More than 90 per cent of the seats of the 32nd Dáil have been filled with candidates from across the political spectrum being returned.

The counts in all but five constituencies have been completed with three Dublin areas, Wexford and Longford-Westmeath still active.

With Fine Gael just slightly ahead of Fianna Fáil in seat numbers there is much talk of a “grand coalition” , which a number of Fianna Fáil TDs have expressed reservations about.

Sinn Féin has increased its seat haul with breakthroughs in a number of constituencies.

The three leaders of the Social Democrats have all taken their seats but the party failed to gain any new TDs. There will again be a Green Party presence in the Dáil as leader Eamon Ryan and his deputy Catherine Martin were both elected.

The first Labour breakthrough came via Tánaiste Joan Burton, who faced a tough battle to hold on to her seat in Dublin West. Her deputy leader, Minister for the Environment Alan Kelly scraped through in Tipperary but Labour may yet struggle to get seven seats to hold speaking rights in the Dáil.

Independent Alliance TD Shane Ross, in Dublin Rathdown, was the first person elected in the State.

Fine Gael deputy leader and Minister for Children James Reilly has been eliminated in Dublin Fingal. He is among the many high-profile casualties who also include former Fine Gael minister for justice Alan Shatter, Minister for Communications Alex White and Lucinda Creighton.

Smaller parties such as the Anti-Austerity Alliance-People Before Profit appear set to record major gains. Renua is without a TD. In Kerry both of the Healy-Rae brothers were elected.

Both Taoiseach Enda Kenny and Ms Burton acknowledged their respective Fine Gael and Labour parties have had a difficult election with Fianna Fáil and Sinn Féin banking gains at their expense.

IS THIS CHANGE?: Una Mullally says the political system failed to put forward a realistic alternative to the establishment and the electorate has been left with a whole lot of uncertainty.

NEW ERA: The parties are all entering uncharted waters and the ultimate result could well be a rebalancing of the entire political system rather than the novelty of a grand coalition between the two Civil War parties, write Stephen Collins.

LABOUR LOSSES: The disastrous result for the Labour Party is described as “ beyond dreadful” by Diarmaid Ferriter “Nor is it deserved, and there should be no dancing on the party’s grave,” he writes.

S’UP BRO: The Healy-Rae brothers have both been elected after Danny received 3,835 in transfers in the second count from his poll-topping brother Michael in Co Kerry.

LATE IN LOUTH: Fine Gael defended its two seats in Louth with Fergus O’Dowd and Peter Fitzpatrick taking the last two seats at the expense of outgoing Labour Minister of State Ged Nash.

KELLY KEPT: It was a close run thing but Minister for the Environment and deputy Labour leader Alan Kelly has been returned in Tipperary. After happily bouncing around on the shoulders of his supporters, a relieved Mr Kelly said Fianna Fáil and Fine Gael should put the past aside and form a coalition.

FF TDS COOL ON COALITION:A number of elected Fianna Fáil TDs have expressed reservations about a possible “grand coalition” with Fine Gael, even though the trend from the election results suggests this is the most straightforward pairing for the next government.

GREENS BACK:Green Party leader Eamon Ryan has become the second in his party elected to the Dáil, winning a seat in Dublin Bay South.

RAKES OF RECOUNTS: There will be partial or total recountsin Dublin Bay North, Dublin South-West and Wexford on Monday, with decisions also awaited in Dublin South-Central and Longford-Westmeath.

MINISTERS MAKE IT: Outgoing ministers Michael Noonan and Jan O’Sullivan have taken the final two seats in Limerick city, after both were elected with the help of Sinn Féin transfers.

ONE GP, ONE SEAT: Dr Michael Harty of the “No GP, no village” movement has been elected in Clare. He follows Timmy Dooley (FF) into the 32nd Dáil.

DEASY’S DAY: Fine Gael’s John Deasy, a regular critic of his own party, has beaten colleague and Minister of State Paudie Coffey to the last seat in Waterford. John Halligan (Ind), David Cullinane (SF) and Mary Butler (FF), who topped the poll, were also elected.

ENDA THE ROAD?: The Taoiseach has ruled out resigning despite his government suffering a resounding defeat. He acknowledged the emerging election results were a bitter blow to his party.

FF DENIED: Fianna Fáil was on course to take three seats in the Carlow-Kilkenny constituency with John McGuinness returned on the fifth count and his colleagues Bobby Aylward and Jennifer Murnane O’Connor well placed in the race. However, Fine Gael held two seats and Sinn Féin took one with Ms Murnane O’Connor denied.

REILLY GONE: Minister for Children James Reilly has lost his seat in Dublin Fingal where Fianna Fáil’s Darragh O’Brien has ended the party’s wait to take a seat in the capital.

HOWLIN HOLDS: Brendan Howlin of Labour, the Minister for Public Expenditure, topped the poll in Wexford and was elected on the ninth count. Mick Wallace has seen his vote fall but is not yet in danger of losing his seat. However a full recount will take place on Monday at 10am after Johnny Mythen of Sinn Féin was 52 votes short.

FF TOPPERS: Fianna Fáil’s Seán Fleming topped the poll comfortably in Laois with 13,626 votes and was elected on the first count. He was the first Fianna Fáil TD to be elected. Barry Cowen in Offaly, Mary Butler in Waterford and Shane Cassells in Meath West were not too far behind him.

LIVE UPDATES: Our election day liveblog will keep you informed of what is going on around the constituencies and country.

DEMOCRACY’S DAY: Whatever the outcome of the election, Stephen Collins argues it is a good day to be an Irish citizen.

BURTON’S BATTLE: Labour leader and Tánaiste Joan Burton has survived a major scrap to hold her seat in Dublin West. Leo Varadkar (FG) has been elected, as has Jack Chambers (FF) and Ruth Coppinger (AAA-PBP).

ROUND TWO?: Fine Gael strategist Mark Mortell has admitted another election may not be too far around the corner. He said his party could win “less than 50 seats” and that there is a theoretical possibility that Fianna Fáil will return more TDs.

LEADERS’ QUESTIONS: Fiach Kelly on how things have worked out for the party leaders and how finding a stable and lasting government is likely to prove difficult.

SOC DEMS: The three figures heads of the Social Democrats – Catherine Murphy, Stephen Donnelly and Róisín Shortall – polled well in their respective constituencies of Kildare North, Wicklow and Dublin North West. Ms Shortall was elected on the first count with 10,540 votes, as was Mr Donnelly and Ms Murphy. No other party candidate has yet been returned.

FIRST PAST THE POST: Independent Alliance TD Shane Ross was the first person to be elected after topping the poll in Dublin Rathdown. He exceeded the quota on the second count.

FULL COVERAGE: The Irish Times has reporters at all of the count centres, check the latestnews and results from across the country and constituencies here .