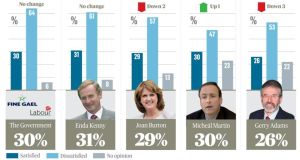 The new Dáil term begins in earnest for our politicians as they ready themselves for the election battle ahead. The batteries may be recharged but the summer hiatus means, electorally at least, the parties take up where they left off in June.

What is remarkable about this latest Irish Times/Ipsos MRBI poll, conducted on Monday and Tuesday of this week, is how little movement there has been in party support or Government satisfaction over the summer.

Time has stood still for Fine Gael (on 28 per cent, unchanged). With the economic news during the summer overwhelmingly positive, this may be viewed by Fine Gael as a lost opportunity.

Fianna Fáil, on 20 per cent, is in familiar territory having registered 20 per cent in three out of our last five polls.

Labour has moved up one point, to 8 per cent – still in single digits but heading in the right direction. Sinn Féin, on the other hand, is going in the wrong direction, down two points to 19 per cent in this latest poll.

The Independent/Others bloc is up one point to 25 per cent, a modest gain perhaps reflecting recent changes to the composition and complexion of this group.

Satisfaction with the Government, at 30 per cent, is unchanged.

In the weeks ahead the Government will be looking to escape from these crises and controversies with announcements of tax reductions, pay hikes and investment plans – a manifesto budget to regain the momentum.

With 28 per cent of the vote, Fine Gael is by far the most popular party in Ireland today, although not as popular as when it entered Government.

Fine Gael achieved 38 per cent of the vote in the first Irish Times/Ipsos MRBI 2011 post-election poll.

If we accept that, more than four years later, the party has achieved what it set out to achieve (in terms of the economic goals at least), we can conclude there is a gap between what voters thought success would look like and what success looks like today. This is the gap Fine Gael must close in the months ahead.

Dublin holds the key to Fine Gael closing some of this gap.

Fine Gael typically underperforms in Dublin, except in 2011 when a strong Dublin vote underpinned the party’s success. Since 2011, support for the party in Dublin has retreated, to 19 per cent currently, ironically despite all the talk of the recovery being concentrated in Dublin.

From a Coalition perspective, Labour’s relative strength in urban areas complements Fine Gael’s weakness, but combined the two Government parties achieve only 32 per cent of the vote in Dublin, not nearly enough to enable the two parties to form a government.

Dublin also matters to other parties.

Strongest in Dublin are Independents and Others, with 34 per cent of the vote compared with 25 per cent across the country as a whole. Dublin is a city of extremes, home to the most and least deprived neighbourhoods in Ireland. Such diversity poses problems for mainstream parties, easily outflanked on the left and on the right by Independents and smaller groupings.

Nationally, Fianna Fáil achieves 20 per cent support, compared with only 14 per cent in the capital. In the same way Fine Gael needed Dublin in 2011, Fianna Fáil relied on a Dublin surge to get it across the line in 2007.

And Dublin matters to Sinn Féin. Although the party is down two points in this latest poll (to 19 per cent), it has doubled its vote in the past five years, with more gains in urban areas outside Dublin than in the capital itself.

There are more votes for Sinn Féin in Dublin if the party can position itself as a more attractive alternative to anti-austerity candidates and alliances.

Sinn Féin has other challenges. Alleged involvement in criminal events of the past and present continues to dog the party. That said, the jury is out on the extent to which these allegations have damaged the Sinn Féin vote.

Both Sinn Féin and Independents/Others have seen a decline in support over the past year, while support for Fine Gael has increased, suggesting Sinn Féin’s recent losses stem from a broader shift from left to right as the economy recovers.

With an election looming, the performances of party leaders will come under the spotlight.

Now may be the time for one leader to shine.