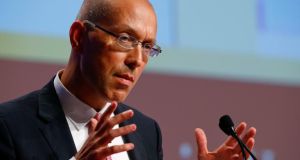 Jörg Asmussen, a member of the ECB’s executive board and one of the prime figures in the troika’s management of Ireland’s bailout, answers questions about the Outright Monetary Transactions initiative. Photograph: Ralph Orlowski/Reuters

Minister for Finance Michael Noonan said last week that the decision to leave the bailout without a credit line meant Ireland was neither at an advantage nor a disadvantage in respect of the European Central Bank’s bond-buying programme, known as the Outright Monetary Transactions (OMT) initiative.

Such remarks led The Irish Times to submit a series of questions to an ECB spokesman in Frankfurt on Ireland’s position vis-a-vis the OMT scheme in the wake of the bailout, which ends next month. The questions were answered yesterday by Jörg Asmussen, a member of the ECB’s executive board and one of the prime figures in the troika’s management of Ireland’s bailout.

The Irish Times: Does Ireland’s decision to leave the bailout without a precautionary credit line from the ESM change anything as regards the Government’s right to access OMT from the ECB in the event of a crisis?

Asmussen: Ireland’s decision for a so-called clean exit had no direct implication on OMT, because even with keeping a credit line OMT would not have been available automatically. There is no such thing as a “right to access OMT”.
OMT is not a facility that can be “accessed” or even “applied for”. OMT is something that the Governing Council of the ECB might consider to safeguard an appropriate monetary policy transmission in the euro area.

IT: Is Ireland’s ability to access OMT aid from the ECB made any easier or more difficult by the Government’s exit from the bailout without a precautionary credit facility?

Asmussen: The decision of the Irish Government has not changed the position of the country concerning OMT. Ireland was not eligible for OMT and will not be after the 1st of January. As the ECB’s press release of 6 Sept 2012 clearly states: having a full or a precautionary EFSF/ESM programme [an ECCL] is a necessary condition for a country to be eligible for OMT, provided that they include the possibility of ESM primary market purchases. Ireland’s decision not to apply for a precautionary programme means it currently does not fulfil this necessary condition. [An ECCL is an Enhanced Conditions Credit Line, one of two forms of precautionary credit facility available from the European Stability Mechanism bailout fund]

IT: If Ireland wanted access to OMT due to a crisis in the post-bailout period, would the Government be obliged to seek a precautionary credit line from the ESM first?

Asmussen: Ireland would need to apply for a new EFSF/ESM macroeconomic adjustment programme or precautionary programme to be considered for OMT.

IT: Is Ireland’s right of access to OMT confined to “systemic” euro zone risk or is a right of access for risks to Ireland which are not deemed systemic for the euro zone? What criteria apply?

Asmussen: OMT is only possible for countries that are using a full or precautionary programme. OMT aims “at safeguarding an appropriate monetary policy transmission and the singleness of monetary policy”, so OMT always has to be warranted from a monetary policy perspective.