Harry McGee and Arthur Beesley assess the trends in the Dun Laoghaire/Rathdown local election count where some interesting comparisons can be made with the rest of the country. Video: Darragh Bambrick 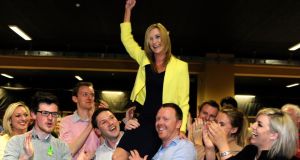 Fianna Fáil’s Kate Feeney has been elected in the Blackrock ward.Photograph: DAVE MEEHANS

The counting of votes in the Dún Laoghaire ward of Dún Laoghaire-Rathdown County Council has been adjourned indefinitely.

Labour requested that ballots be rechecked after long-serving councillor Jane Dillon Byrne lost out on the final seat to Mary Fayne of Fine Gael by a margin of some 20 votes.

Ballots were examined for almost eight hours today at the Citywest count centre but there was little sign of the gap being bridged. The ballots will now be returned to Dún Laoghaire-Rathdown County Council under Garda escort and the rechecking will resume some time in the near future.

It was unclear tonight as to whether a full recount is needed in the ward which had a total valid poll of almost 15,000.

In Dún Laoghaire, John Bailey (FG) topped the poll comfortably and was deemed elected after the first count but not formally declared.

Cormac Devlin (FF) was deemed elected on the 12th count but not formally declared.

An earlier recheck of votes in the Killiney-Shankill district failed to significantly alter the gap between Cillian Doyle (PBP) and Denis Callaghan (Lab), with the latter deemed elected this evening.

The final result of the Glencullen-Sandyford district was confirmed this afternoon with Kevin Daly (Ind), Peter O’Brien (Lab) and Lynsey McGovern (Ind) elected ahead of Fine Gael’s Tom Joyce on the 10th count.

Lettie McCarthy (Lab) and Neale Richmond (FG) were elected on the first count and Tom Murphy (FF) followed on the seventh. Chris Curran (SF) was elected on the ninth count.

In Blackrock, former minister Mary Hanafin (FF) was elected on the first count despite efforts by her party to make her withdraw before the nomination process closed.

Kate Feeney, recognised as the official Fianna Fáil candidate in the area, was elected on the fifth count along with Victor Boyhan (Ind) and Barry Ward (FG). Marie Baker (FG) topped the poll in the district and was elected on the first count with 1,797 first preferences.

Deirdre Kingston (Lab) beat Lola Hynes (PBP) to the final seat, which was decided by the distribution of Mr Ward’s surplus.

In Stillorgan, Barry Saul (FG) topped the poll and was elected on the first count with a surplus of 744 votes.

His party colleague Josepha Madigan came in on the second count and Deirdre Donnelly (Ind) was next to cross the line.

Richard Humphreys (Lab) exceeded the quota on the eight count - the same point that Liam Dockrey and Gerry Horkan (both FF) were deemed elected without reaching the 1,411 quota.

It took nine counts to get a candidate across the line in the Dundrum electoral area, with Shay Brennan (FF), son of the late minister Seamus, first past the post.

Sitting councillors Jim O’Dea (FG) and Tony Fox (Ind) were in the running to defend their seats but came up short in the end.