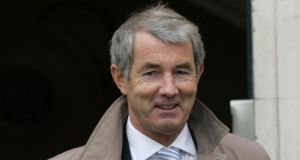 Tipperary TD Michael Lowry: “If I’m re-elected I’d be happy to look at it. In principle I’ve no difficulty supporting a government that produces economic policies that are good for the country.” Photograph: Eric Luke

The Government has begun reaching out to some Independent TDs ahead of the general election as senior figures calculate the administration can return to power with the support of non-party deputies.

Minister for Finance Michael Noonan has suggested Fine Gael and Labour could govern for a second term even with “devastating” seat losses if they secured the backing of “centre-right” Independents.

Minority governments or those with fragile majorities have traditionally bolstered their numbers in the Dáil by striking deals that benefit Independents’ constituencies in exchange for their votes.

Tipperary TD Michael Lowry, a former Fine Gael minister, said the outcome of the election would depend on the circumstances under which it was called.

“If I’m re-elected I’d be happy to look at it. In principle I’ve no difficulty supporting a

government that produces economic policies that are good for the country,” he said.

“I will be quite happy to support a government where I believe the direction, focus and plan of the government is in the long term interest of the country,” he said.

“But I’m not going to support a government, even if they have all the goodies, if in the long-term they could damage the country.”

Michael Healy-Rae, from Kerry South, said he did not know if he was one of the centrist deputies to whom Mr Noonan was alluding

in his address to a Bloomberg audience.

“I don’t know who he’s referring to but I see all these people making shapes about who they will and won’t go with. Everyone should calm down. After the election let everybody see who’s still standing and then let’s see.”

Terence Flanagan of Dublin North East said: “I wouldn’t rule anything in or out.”

Mr Flanagan, who lost the Fine Gael whip over abortion legislation, is examining his options ahead of the election. He is talking to Lucinda Creighton about her new party but has not made a decision.

Kerry South TD Tom Fleming said he had not been approached by any Government figures attempting to sound out his potential to support a new administration.

“There were no overtures to me. The first thing we have to do is get elected. I think it would be totally hypothetical to even contemplate looking into the crystal ball,” said Mr Fleming.