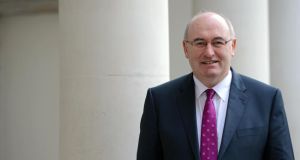 Phil Hogan was nominated in July by the Government as Ireland’s next European commissioner. Photograph: Eric Luke

Independent MEP Nessa Childers has written to members of the Socialists and Democrats Group in the European Parliament, raising “serious reservations” about Phil Hogan’s suitability for the post of Irish EU commissioner.

In a letter to the group’s 191 MEPs, who will vote on Mr Hogan’s appointment, Ms Childers alleges that Mr Hogan’s involvement in a dispute over accommodation for a Traveller family in Kilkenny means his appointment would be “a step backwards for equality” .

Ms Childers is the only Irish MEP in the S&D Group in the parliament, following the Labour Party’s failure to win any seats in the European elections. The 28 nominated EU commissioners will be questioned by their relevant European Parliament committee later this month, with the parliament voting on appointment in October.

In the letter to MEPs this week, Ms Childers says Mr Hogan submitted a request to Kilkenny County Council in September 2012 to prevent a Traveller family being provided with social housing.

His actions are “incompatible with the proper discharge of the duties incumbent upon a European commissioner,” Ms Childers states in the letter.

When contacted by The Irish Times last night, a Government spokesman said: “The assertions made by Ms Childers are utterly and completely without foundation and are similar to words repeated in some parts of the media previously which are the subject of court proceedings.”

Mr Hogan, nominated in July by the Government as Ireland’s next European commissioner, will meet the incoming president of the European Commission Jean-Claude Juncker tomorrow in Brussels.

Mr Juncker began interviewing commissioners-designate yesterday and will announce the allocation of portfolios by the middle of next week. While Dublin indicated its interest in the agriculture portfolio in its official communiqué to the European Commission this summer, the Government also expressed its preference for a portfolio related to the area of growth, jobs and investment, a point reiterated by the Taoiseach last Saturday following his meeting with Mr Juncker.

While Romania and Spain are understood to be interested in the agriculture portfolio, Romania, whose commissioner Decian Ciolos is the current agriculture commissioner, has nominated a second candidate in the event that the country is not awarded the portfolio.

However, Spain’s nominee, former agriculture minister Miguel Arias Canete, is seen as a strong candidate for agriculture, though some EU sources suggested he may not want that portfolio.

While Spain is interested in the head of the euro group position, European Council president Herman Van Rompuy has said the position will not be available until next year.