Ceann Comhairle to be elected by secret ballot 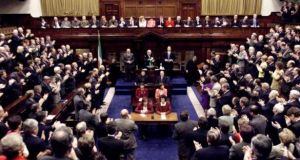 Taoiseach expected to seek approval for the change, which will come into effect for the first sitting of the new Dáil after the forthcoming general election. Photograph: The Irish Times

Taoiseach Enda Kenny is planning to adopt a political reform agenda that will see the Ceann Comhairle in the next Dáil elected by secret ballot.

The move, which has been advocated by the Constitutional Convention and a number of political scientists, will mark a fundamental shift in the way the Dáil does its business.

At tomorrow’s Cabinet meeting, the first since Christmas, Mr Kenny is expected to seek approval for the change, which will come into effect for the first sitting of the new Dáil after the forthcoming general election.

Another element of the reform will see the election of Oireachtas committee chairs on the basis of party strength rather than the current system of appointment by the Government.

Up to now the Ceann Comhairle has been elected by open vote as soon as the Dáil meets after a general election, giving the government of the day effective control over the appointment.

The introduction of a secret ballot will inevitably enhance the independence of the office as the Ceann Comhairle’s authority will come directly from the members of the Dáil rather than the government.

The Taoiseach has been advised by Attorney General Máire Whelan that the election of the Ceann Comhairle by secret ballot and the change in the election procedures for committee chairs can be implemented through changes in Dáil standing orders.

Another important change to which Mr Kenny has agreed is that the Taoiseach should appear before the working group of Oireachtas Committee chairs on a regular basis.

The current chair of the working group, Cork East Fine Gael TD David Stanton, has strongly advocated this reform for some time as a way of strengthening the ability of the Oireachtas to hold the Government to account.

These three changes are regarded by the Government as a continuation of the Oireachtas reforms they have already introduced including additional leader’s questions and topical issue debates.