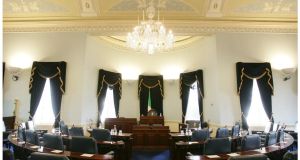 Mark Daly of Fianna Fáil has collected signatures in support of a petition for the House to return from its summer recess to debate the regulations on organ donations from 20 senators.

Cathaoirleach of the Seanad Paddy Burke has confirmed his intention to recall the Upper House later this month to discuss EU organ donation law if a Fianna Fáil senator completes the process of demanding such a recall.

Mark Daly of Fianna Fáil has collected signatures in support of a petition for the House to return from its summer recess to debate the regulations on organ donations from 20 senators. The petition is believed to be valid because it meets requirement for the support of one-third of the House.

However, Mr Burke noted that he was not yet in a position to call the Seanad back as Mr Daly had not given him the signatures. “If I don’t get the signatures I can’t recall the House,” he said last night.

It is understood the Seanad is likely to sit on the week of August 19th or early the following week if the House is recalled. After rising for the recess last month, the Seanad had not been due to sit again until next month.

Mr Daly’s initiative has been dismissed as a Fianna Fáil stunt by Fine Gael but the EU law on organ donations, which was signed into Irish legislation last year, is seriously flawed, according to organ deonation advocates

For the law to be changed, however, the approval of the Dáil would be required before the end of the month. This is considered unlikely in political circles, not least because of the Government’s large Dáil majority.

The recall campaign comes ahead of the referendum to scrap the Seanad in October.