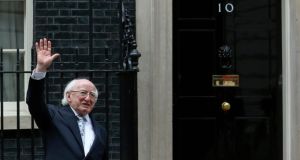 The workman fiddled with the red carpet outside the door of No 10 Downing Street just minutes before President Michael D Higgins’s chauffeur-driven Bentley, adorned with the Tricolour, pulled up.

The presidential motorcade had come from the Royal Society, attracting waves from curious onlookers, while a police motorcycle escort stopped all of the traffic on Whitehall “with one wave” of their hands, to borrow from the lyrics of the Mountains of Mourne .

British prime minister David Cameron, who had arrived back from prime minister’s questions in the House of Commons, was already outside the door, beyond the red carpet, brushing down his jacket before coming forward to shake the President’s hand.

The party moved quickly inside.

The prime minister and President went upstairs, where they sat in armchairs before offering short statements to reporters and TV cameras who had filed in to hear them.

Reflecting the efforts of the British side to make the visit a success, Cameron extended “an extremely warm welcome, Mr President”, adding: “it is really remarkable how Anglo-Irish relations have not only been transformed but I see them on an ever-increasing gradient.

“I am really excited by the things that we are now doing together, two countries and two governments,” he said, enthusiastically, “I am excited by some of the new projects that we are talking about.”

“I am determined to do what I can,” he said, adding that Ireland and the United Kingdom enjoyed “a very special partnership” — both are now “not just neighbours, but really good friends and deep friends”, he said.


Air of enthusiasm
The air of enthusiasm was mirrored by the President, who said he was “so pleased to say thank you as well for the incredible reception that I have received” during the first and second days of his state visit — the first-ever by an Irish head of state.

Equally, the President, a one-time emigrant himself to Britain, said he had taken the opportunity of thanking Queen Elizabeth for the reception she gave at Buckingham Palace for members of the Irish community in Britain.

On a day when he had given one major speech already and with another to come, the President talked of the importance of Britain for Irish companies.

Saying that he was “absolutely delighted to be here and to be making this historic visit”, he said Anglo-Irish relations are enjoying “a great deepening kind of co-operation that is very important. It is obviously there in trade and the economy.


‘Indigenous sector’
“I think of our indigenous sector exporting as it does 40 per cent of its produce to Britain and equally Ireland being Britain’s fifth-best customer. It is very important in trade. During the visit, I have just come from the Royal Society, over the years Irish science, Irish technology, Irish culture, Ireland’s presence in the English language, all the things that we have done together.”

At Windsor Castle on Tuesday night, the President said he and the queen had separately spoken in their speeches at the state banquet of how “our proximity that has sometimes stopped us from seeing the richness in each other.


‘Great opportunities’
“But I hope that the visit will enable great opportunities for the deepening of the peace process that we have, one that requires our continuing vigilance,” he said, before the two adjourned for lunch.

“Let’s see what more we can do together,” said Cameron.