Burton says there is basis for deal to avert rail strike 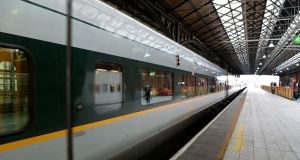 Joan Burton told the Dáil on Thursday Iarnród Éireann had said it was willing to share the benefits arising from future productivity measures undertaken by the drivers. File photograph: David Sleator/The Irish Times

Tánaiste Joan Burton has said she believes there is a basis for agreement to avert the planned three-hour strike by train drivers on Friday.

“I would say to both parties it is very important we get a settlement of the dispute,’’ she said.

“I believe in all the material put forward by both sides there are the grounds for reaching an agreement.’’

Ms Burton told the Dáil on Thursday Iarnród Éireann had said it was willing to share the benefits arising from future productivity measures undertaken by the drivers.

She was replying to Fianna Fáil transport spokesman Timmy Dooley who said commuters were facing a rail strike on one of the busiest days for people using public transport.

He said the National Bus and Rail Union and Siptu had warned since last August a strike was inevitable unless genuine efforts were made to resolve the outstanding issues.

“That is almost three months ago Tánaiste, and there has been virtually no input whatsoever from Government to find a resolution,’’ he added.

He accused the Government of taking “a hands-off approach’’ on the issue.