From Universal Social Charge and child benefit to excise duty on alcohol and cigarettes, Consumer Affairs Correspondent Conor Pope tells us what we can expect to see in Budget 2016. 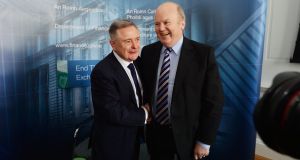 Brendan Howlin, Minister for Public Expenditure and Reform and Michael Noonan, Minister for Finance speaking to media after the publication of End of September 2015 Exchequer Returns at the Department of Finance. Photograph: Alan Betson/The Irish Times

The Coalition will unveil a tax credit for the self-employed and farmers worth €500 a year and a €3 weekly increase in the old-age pension in today’s budget.

These measures, along with income-tax cuts aimed at “middle” earners, come amid steps to emphasise the benefit of the economic recovery to working families as the Government prepares to seek re-election.

Minister for Health Leo Varadkar will also receive funding to extend the free GP care scheme to children under 12.

Last year saw free GP care rolled out to the under sixes and over 70s, and Mr Varadkar said the next stage is to introduce it to children under 18.

The measure is subject to the agreement of the Irish Medical Organisation. The move will be seen as a win for Mr Varadkar, with suggestions there would be no further development of the free GP care scheme last year.

Minister for Finance Michael Noonan and Minister for Public Expenditure Brendan Howlin will also outline measures seen as priorities for the Coalition’s second term in office as they try to set the terms of the election campaign.

These will include reductions to the universal social charge (USC) – the centrepiece of which will be a cut of 1.5 points to the 7 per cent rate – as a step towards its eventual elimination.USC changes will account for the bulk of the €750 million Mr Noonan has available for tax and USC cuts. Mr Howlin will have the same figure for spending increases.

Mr Howlin has said the budget will focus on supporting work.

He was speaking on his way into the final Cabinet meeting before the budget is presented on Tuesday afternoon.

“The Government has decided that the budget will focus on work and the supporting of work, it will support families, the elderly and the vulnerable,” he said.

“So they’re the main themes that you’ll see knitted through the announcements made both on the tax side by Michael and on the expenditure side by myself.”

Mr Howlin added: “Speculation is rife. Some of the things I’ve read seem accurate to me, not all. But you won’t have long to wait.”

Mr Noonan will introduce a tax credit, akin to the €1,650 PAYE tax credit, to the self-employed and farmers. This credit, worth €500 next year, would be increased in 2017 and 2018 if the Government returns to power.

The inheritance tax threshold for children inheriting the family home will raise to €280,000, the start of a process that will see it increase to €500,000 over a five year period.

Budget 2016, to be unveiled in the Dáil at 2.15pm, includes a medium-term fiscal framework plan that will set out how Fine Gael and Labour propose to run the State’s finances if they are returned to office.

Minister for Enterprise Richard Bruton has secured a reduction in capital gains tax for the self-employed and entrepreneurs to 20 per cent from 33 per cent.

Investment in childcare is also expected in a package which includes a second year of free preschool education for every child aged between three and five. Child benefit will rise by €5, alongside paid paternity leave and moves to improve access to after-school care.

Tánaiste Joan Burton will announce that the welfare Christmas bonus will be restored to 75 per cent of a recipient’s weekly payment. The move costing €197 million will be funded by a supplementary estimate to the Department of Social Protection. It means a pensioner on the current rate of €230 will receive a bonus of €173 and a dole claimant receiving unemployment benefit of €188 will get a bonus of €141.

The price of a pack of cigarettes is to increase by 50 cent.