‘I detect a knowledge and an appreciation of our unique status, and this will form part of the negotiations’ 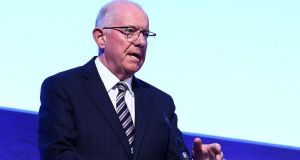 Minister for Foreign Affairs Charlie Flanagan said Dublin would remain ‘fully at the heart of Europe’ and that the EU had been the ‘foundation stone’ of Ireland’s recent economic recovery. Photograph: Brian Lawless/PA

Minister for Foreign Affairs Charlie Flanagan has said he is confident Berlin understands the sensitivity of Ireland’s unique relationship with Britain -- in particular Dublin’s Northern Ireland border concerns - after the Brexit “earthquake”.

Ahead of Taoiseach Enda Kenny’s meeting on Tuesday with German chancellor Angela Merkel, Mr Flanagan met his conterpart Frank-Walter Steinmeier in Berlin on Friday to discuss the consequences of the British vote to leave the EU on the peace process, the common travel area between the UK and Ireland, and the Northern Ireland border.

“I detect a knowledge and an appreciation of our unique status, and this will form part of the negotiations,” said Mr Flanagan. He was optimistic the wider EU could play as constructive a role in redefining Ireland’s new relationship to Britain as it did during the years of bedding down the peace process.

“There were numerous instances over the years where it wasn’t possible to reach political solutions on very complex issues without the arena or the atmosphere of the European Union. ”

During his talks with Mr Steinmeier and later at a meeting with the Bundestag European Affairs committee, Mr Flanagan underlined that Ireland would remain “fully at the heart of Europe”, noting that the EU had been the “foundation stone” of Ireland’s recent economic recovery.

The Minister said it was important a new British government was given time and space to find its feet, but that negotiations could not turn into a “free for all”.

Meanwhile the EU-27 must re-connect with citizens and deliver on previous pledges rather than pushing ahead with new policy areas. The Government preferred current arrangements with European Commission involvement, added Mr Flanagan, because “it provides an avenue which ultimately can give rise to certainty, rather than a further division of power”.

Last weekend, German finance minister Wolfgang Schäuble said Berlin favoured swift progress on important challenges for Europ, such as on migration and security issues, if necessary by intergovernmental deals outside of the institutional EU framework.

German foreign minister Frank-Walter Steinmeier said he was aware that the Brexit vote was far from uniform, with vast differences in generational and regional voting, and that it brought particular difficulties should Ireland’s invisible border became visible again.

“We in the EU have no other chance but to ensure that the period of insecurity is as short as possible,” said Mr Steinmeier, expressing hope that a new government in Britain would waste no time in commencing departure talks. “This is not the time to fall victim to hysteria or freeze up in shock.”

Despite a rise in negative mood against the EU from fringe parties around Europe, both ministers pointed to recent polls showing an overwhelming majority in their respective countries for remaining in the EU.

On the case of Irish citizen Ibrahim Halawa, Mr Flanagan said he still had faith in the diplomatic process despite the 20 year-old’s imprisonment in Egypt for over 1,000 days without trial.

“I don’t see other options, though I myself am frustrated by the unacceptable delay in bringing this matter to a conclusion,” he said. He expressed hope that a promised Egyptian technical committee would expedite the process of having a verdict recorded.