Ballot Capers: Animal kingdom asserts itself on the campaign trail

Hugh Linehan takes a sideways look at the election 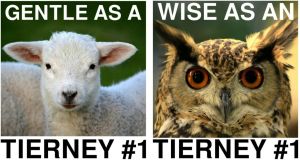 To Wit, To Woo We’re conscious that dogs have featured prominently – perhaps too prominently

– in our election coverage this week, and we do want to ensure fair and balanced coverage for the rest of the animal kingdom. Many thanks, therefore, to Dublin Bay South candidate Eoin Tierney, who has produced a series of attractive animal-themed posters. Eoin is standing as an Independent, but according to his website he is going out to bat (sorry), for the Open Party, who seek to “ensure the continuing survival of our species and our ecosystem” and “to show kindness and generosity to all, especially those in need, to facilitate the development of efficient systems, and to be accurate and rigorous”. All highly admirable, although we fear when it comes to election day, Eoin will be a lamb to the slaughter.

Quote of the Day

Battles by the Boyne Shenanigans in Drogheda, where satirical website The Faa Side has picked up on shocking Labour allegations that Sinn F

éin activists were circulating negative leaflets against Labour’s junior minister Ged Nash. The Faa’s version of the leaflet includes allegations that Nash voted to tax the elderly by targeting bingo winnings and refused to buy a special edition of An Phoblacht commemorating the hunger strikes.

Mildly amusing at best, but we do continue to hope that Louth will find it in its heart to elect the candidate with the most Father Ted-esque name in this election, Sinn Féin’s Imelda Munster.

The Art of Politics

Check out Alan’s fantastic website at irishelectionliterature.com. “You do have to be interested in politics to get a kick out of this exhibition,” warns the gallery. “Nothing like it has ever been seen in Galway before.” We’re so there.