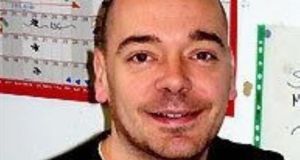 Artistic director of Limerick City of Culture, Karl Wallace, was appointed to the position last March.

The artistic director of Limerick City of Culture has quit just two days into the city’s reign as Ireland’s first national city of culture.

Speculation that Karl Wallace, who was appointed to the position last March, was planning to resign was rife in recent weeks. However, the London-born former chief executive has not yet commented publicly on the reasons for his departure.

“He has tendered his resignation but will not be issuing a statement until today,” a source said.

It has also emerged that Jo Mangan and Maeve McGrath, two non-staff programmers, contracted to provide services during Limerick City of Culture, have also written letters indicating their intention to withdraw from the project.

Limerick City of Culture was unavailable for comment last night.

Mr Wallace was also unavailable for comment despite repeated calls. However, it is understood that he tendered his letter of resignation to Limerick City Council in recent days.

Resignation
The resignation of the artistic director of Limerick City of Culture comes just two days after thousands of people attended the New Year’s Eve launch of the 12-month project, which has been dogged by controversy over recent months.

In a statement this afternoon, Limerick City of Culture board chairman Pat Cox said confirmed the resignations.

“We would like to thank all three for their contribution to Limerick National City of Culture 2014 and wish them well in their future careers,” he said. “We will be taking stock of resourcing requirements in light of these decisions and will strengthen our team accordingly.

“In the meantime, all projects and funding committed to are very much on track. Our focus will continue to be on making sure the momentum already built up and the value and entertainment level for all attending events across Limerick this year is at the highest possible level.”

Mr Wallace’s resignation follows the very public row over the appointment of Patricia Ryan to the top position of chief executive. The 18-month contract had not been advertised.

Ms Ryan previously worked as an adviser to Mr Cox. She has also worked as special adviser to Mary Harney when she was health minister.

Mr Murray said he used a process which was “highly acceptable in context of the private sector” to ensure the most appropriate person was put in place to do the job.

Bonus
The salary also includes a bonus of a maximum of €15,000 a year, subject to meeting key performance indicators.

As she prepared for the first events of Limerick’s year as national city of culture, Ms Ryan said: “Today is the first day of the next 12 months, and I will be working night, noon, and morning, and I hope people enjoy it, I really do.”

When asked about the controversy around the manner in which she was appointed, she said: “To be honest with you, I didn’t think it was very relevant to people on the ground.

“I think people were more interested in the programme, what’s going to happen, and what’s in it for them. And, to be honest, that’s what my focus has been and that’s what it will continue to be.”

Ms Ryan said she had not been “put off” the job by the controversy.

“No. If anything I’m even more determined.”.