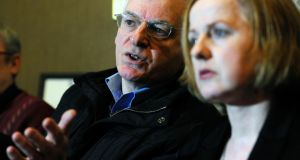 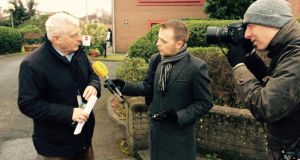 Socialist Party TD Joe Higgins has said the arrest of his colleague Paul Murphy and other anti-water charges protesters was “way over the top” and a waste of essential Garda resources.

He said he understood a criminal investigation involving six gardaí and an incident room in Tallaght Garda station had been ongoing since November, when a car carrying Tánaiste Joan Burton was blocked by protestors in west Dublin.

Speaking at a press conference in Dublin city centre, Mr Higgins said numerous activists and local people had been interviewed and investigating gardaí had “constantly inquired” about Mr Murphy’s connection with the events.

“Paul Murphy in particular told me he has never been approached by the gardaí, asked for a statement, questioned, interviewed in any way whatsoever since the protests in Tallaght three months ago,” Mr Higgins said.

“So the question for me that the Labour Party has to answer in particular is why this type of heavy-handed political policing, how outrageous that is, at the same time that Labour Party TDs and Ministers routinely break the solemn promises they made to the electorate.”

Mr Higgins said it was “outrageous” that anti-water charges activists should be “taken from their beds” by gardaí early this morning.

He said the anti-water charges campaign would be renewed and intensified. He described water charges as an “odious and hated tax” that people would not accept.

Mr Higgins also said a section of the press had an agenda to try to “smear” the entire anti-water charges movement.

Speaking immediately after the arrests Mr Higgins had suggested the action was “an orchestrated attempt to damage the anti-water charges campaign. It won’t succeed. It’s complete overkill and it’s in contrast to how some other luminaries have been treated.”

“It’s quite outrageous. Six gardaí called to Paul’s house this morning at 7 o’clock and arrested him without warning,” Mr Higgins said.

At the same press conference Socialist Party TD Ruth Coppinger insisted there was “an issue with the policing of the anti-water charges movement”. She said people were “dismayed” that “hordes of gardaí” could be found to attend water charges protests. “It’s completely outrageous and over the top”.

She said her reading of events after viewing social media was that the arrests had “rebounded completely”.

Mr Higgins and Ms Coppinger were speaking at a press conference organised by the Anti-Austerity Alliance.

Meanwhile, Sinn Féin TD Sean Crowe said he was disturbed at media reports of the arrest of Mr Murphy and others.

He said the people involved were “clearly no flight risk” and argued Garda interviews could have been arranged at “any reasonable and mutually convenient time”.

Mr Crowe said Garda resources had to be directed at tackling burglaries, the intimidation of vulnerable residents and drug crime.

“In my opinion the timing and manner of these arrests are designed to get maximum negative media coverage.”